The first gravitational wave detection ushers in a new era of astronomy. 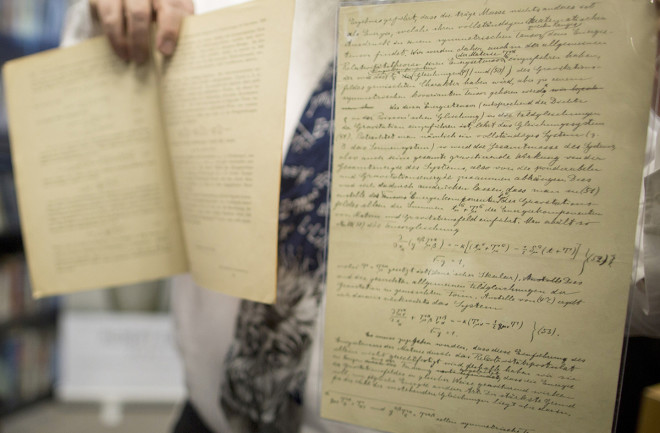 Long ago in a galaxy 1.3 billion light-years away, two black holes collided. Each was dozens of times heavier than the sun, and they orbited each other 100 times a second. As the behemoths merged, they also shed a tremendous amount of energy, the equivalent of three times our sun’s mass. That energy radiated away as a gravitational ripple in space and time, which swept across the cosmos until it reached Earth.

The wave first hit the Laser Interferometer Gravitational-wave Observatory (LIGO) in Hanford, Wash., in September 2015. Then, traveling at the speed of light, it hit the twin LIGO facility in Livingston, La., less than 10 milliseconds later.

At both observatories, extremely sensitive laser measurements inside miles-long tunnels caught the waves’ tiny stretches and squeezes of space-time. The disturbance was so small, it would warp the 25 trillion miles to the nearest star system by just the width of a human hair — but LIGO saw it. Soon, elated scientists were receiving alerts across the planet.

“We have detected gravitational waves. We did it,” LIGO executive director David Reitze said in early February, when the research was published in Physical Review Letters.

The spike in the data that indicated the presence of a gravitational wave. | LIGO Lab

No playwright could have composed a more perfect script. The historic finding arrived almost exactly a century after Albert Einstein used his general theory of relativity — which states that a mass creates gravity by warping space-time — to predict gravitational waves. For generations of physicists and engineers, the confirmation also completed a decades-long hunt for proof, as well as months of excited rumors.

Because gravity is relatively weak, only the most extreme cosmic events — supernovas, spinning neutron stars, colliding black holes — generate waves LIGO can detect. So scientists were surprised to catch one immediately after starting to hunt in September following an equipment upgrade; they captured a second signal Christmas night. For the first time, astronomers had heard the cosmos.

Black holes are aptly named. They emit and reflect no light. Before LIGO, astronomers could only infer a black hole’s existence by watching the behavior of objects caught in its gravitational grip. But LIGO isn’t bound by sight. Its twin detectors and companion supercomputers can pick apart the strength and frequency of gravitational waves to learn a black hole’s mass, spin and location.

That makes LIGO akin to a new kind of telescope, one capable of listening to a previously invisible universe. The first colliding binary black holes that LIGO detected were 36 and 29 solar masses — far bigger than expected. The second pair were more in line with current theories.

And as LIGO continues to detect more collisions, the data about black holes will keep piling up. “We should have tens of detections over the next few years, and over a hundred through the end of the decade,” says LIGO scientist Chad Hanna of Pennsylvania State University. “That’s enough to do some pretty significant astronomy. That’s a big population.”

How do Stars Live and Die?

By studying black holes, the ultimate fate of many stars, LIGO also could help rewrite the textbook version of stellar evolution.

A LIGO technician tests one of the observatory’s mirror systems by shining light on its surface at an angle. The work, which took place before sealing the chamber, is extremely sensitive, requiring a white “bunny suit” and zero contamination. | Matt Heintze/Caltech/MIT/LIGO Lab

Scientists have a pretty good idea of how single stars live and die. Stars like our sun will grow into behemoths called red giants before they shed their outer layers and become an ethereal planetary nebula. Larger stars — those with more than about eight solar masses — will explode as supernovas. And, theoretically, any star at least 25 times bigger than the sun will end its life as a black hole.

But most stars in the Milky Way are actually binaries or multiples, part of a set. What happens to these stars when they die? Understanding stellar pairs, and how one’s individual development affects the other, is fundamental to understanding stellar evolution as a whole. We’ve only barely started to do that.

“Binary evolution is more complicated than single star evolution,” says LIGO scientist Jolien Creighton of the University of Wisconsin-Milwaukee. “There’s a lot more processes that can happen.” By cataloging their stellar corpses using LIGO, astronomers can learn more about how these stars lived out their lives.

After its initial findings, LIGO took a break for upgrades before firing back up again in fall. As more gravitational wave detections stream in, from LIGO and its upcoming ground- and space-based brethren, astronomers will get a better picture of this invisible cosmos that Einstein saw so clearly.