Researchers say they've figured out a way to conduct an experiment putting a single virus in a superposition. 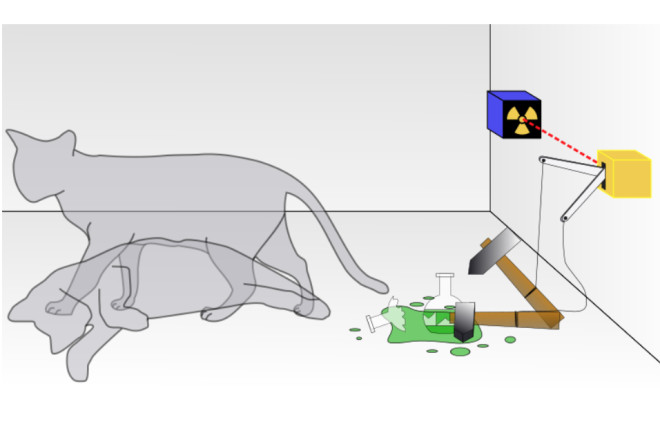 Schrödinger's Cat may be the most famous thought experiment of all time, but due to its quantum trickiness it must remain in the realm of the hypothetical for the time being. However, researchers suggest they might just be able to pull off a similar, smaller-scale experiment they call Schrödinger's virus. The physicist Erwin Schrödinger came up the the feline thought experiment in the 1930s, presenting it as a caution against applying quantum rules to the real, 'classical' world.

At its most fundamental level, quantum mechanics says that particles can only exist in discrete states. For example, researchers can measure the direction a particle spins as either 'up' or 'down', but nothing in between. Yet, as long as no one is looking, the particle exists in a combination of both states simultaneously, a strange blend known as a superposition [Nature News].

Schrödinger proposed an experiment where a cat would be put in box containing a vial of poison gas. A hammer would be suspended ready to smash down on the vial if triggered by the decay of a single atom of radioactive material. If no one looked inside the box, Schrödinger said, the radioactive atom would be in a superposition — both intact and decayed — and therefore the cat would exist in two states as well, being simultaneously alive and dead.

To take a step towards this logical impossibility, researchers propose in a paper posted on the arXiv pre-print server that they start with a much smaller living organism, a virus — although other researchers point out that there is still debate over whether viruses are truly alive.

Still, the researchers say that since they think they've figured out a way to conduct an experiment putting a single virus in a superposition, it may as well be tried. The proposed experiment would involve trapping a single virus in a vacuum chamber, and then gradually cooling it and slowing it down until it rests, motionless, in its lowest possible energy state. Finally a single photon, a light particle, would be beamed into the chamber, and as long as nobody peeked inside the chamber the virus would be placed in a superposition of two states: both moving and not.

Researcher Oriol Romero-Isart, one of paper's coauthors, say the experiment would only work if the virus has certain properties: if it's dielectric (meaning it doesn't conduct electricity), can survive the vacuum and appears transparent to laser light, which would otherwise rip it apart. As luck would have it, Romero-Isart and co say that several viruses fit the bill. The common flu virus is known to be able to survive in a vacuum, seems to have the required dielectric properties and may well be transparent to a careful choice of laser light. The tobacco mosaic virus, to all intents and purposes a dielectric rod, looks like another good candidate [Technology Review].

Some experts say the experiment may have limited use. Physicist Martin Plenio (who's not involved in the proposed research) says there's no reason to think that a virus will behave differently than an inorganic molecule, but he still thinks that testing relatively large objects, whether viruses or molecules, could prove interesting. According to quantum mechanics, it should be possible for macroscopic objects like cars and people to enter superpositions, but that never appears to happen. Studying relatively large objects, says Plenio, may help physicists learn where the quantum world ends and the our macroscopic world begins [Nature News].

80beats: Quantum Teleportation is a Go!