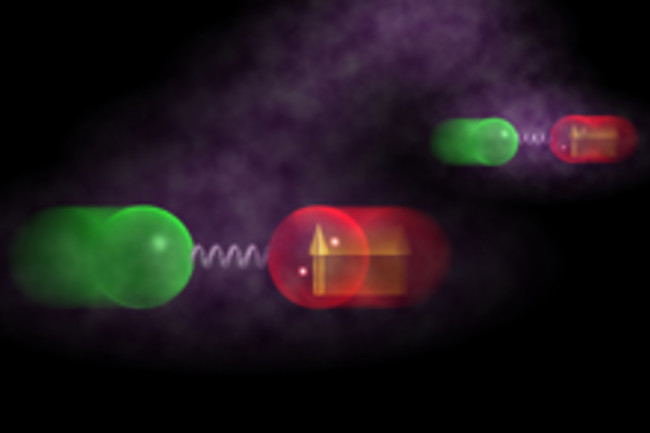 In the realm of quantum mechanics, atoms and subatomic particles just don't follow the rules that we're governed by in the larger world of classical mechanics. For example, the

theory of quantum mechanics predicts that two or more particles can become "entangled" so that even after they are separated in space, when an action is performed on one particle, the other particle responds immediately. Scientists still don't know how the particles send these instantaneous messages to each other, but somehow, once they are entwined, they retain a fundamental connection [LiveScience].

Now, a new study has dragged entanglement a little bit closer to our classical world. Researchers managed to entangle two pairs of vibrating ions so that when the motion of one pair of ions was changed, the other pair reflected the change as well. Previously, researchers have entangled particles in much more esoteric ways, coordinating the spin of electrons or the polarization of photons. With this study, says coauthor John Jost,

"We've entangled something that has never been entangled before, and it's the kind of physical, oscillating system you see in the classical world, just much smaller" [LiveScience].

In the study, published in Nature, the two ion pairs were held about a quarter of a millimeter apart in an ion trap, which is a significant separation for atoms.

In each pair, a beryllium ion was partnered with a magnesium ion. "You can think of them like two balls connected by a spring that vibrate back and forth in unison," says Jost. The first step to achieving these synchronized vibrations relied on standard techniques to entangle the spins of the beryllium ions in each pair. The trick was then to transfer this conventional form of entanglement into the vibration of the ion pairs, using lasers. "Depending on its internal spin state, the beryllium ions will absorb certain frequencies of laser light, which excites them and sets them vibrating," explains Jost. The two entangled pairs of beryllium and magnesium ions then began to vibrate in lockstep [Nature News].

Christopher Monroe, a quantum physicist who wasn't involved in the current study, says he finds the work enticing:

“We all want to move quantum mechanics to the macroscopic world we live in." ... The separation between the quantum world and the macroscopic world is still unclear and interests many researchers. Now that entanglement has been demonstrated in a mechanical system, says Monroe, scientists may be able to apply the findings to larger and larger mechanical systems. Quantum mechanics shouldn’t care whether a system involves a couple atoms or trillions of atoms, Monroe says. “The quantum physics is exactly the same” [Science News].