Quantum Teleportation Is a Go! 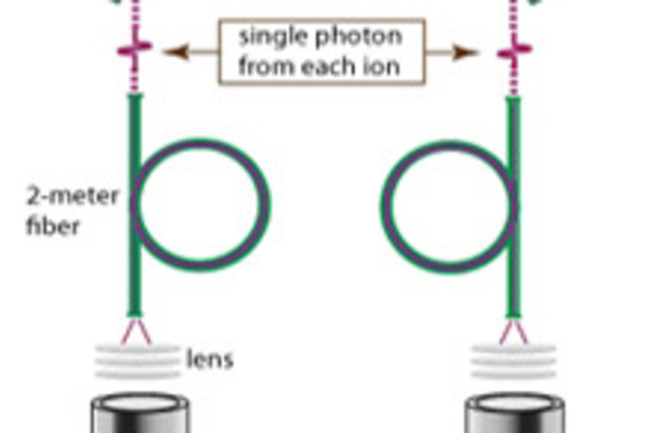 Researchers have accomplished teleportation, though not of the “Beam me up, Scotty” variety. Instead, they sent information between two individual atoms of the element ytterbium, which were suspended in separate containers three feet apart. Because the quantum information instantly hops from one atom to the other without ever crossing the space between the two, scientists call the transfer “teleportation” [Science News].

Over the years, teleportation experiments have demonstrated that quantum states – for example, the spin of a particle or the polarization of a photon – can be teleported using a variety of methods. But the researchers behind the latest experiment … claim that this is the first time information has been teleported between two separate atoms in unconnected enclosures [MSNBC]. Researchers say that atoms are a better bet than photons for storing quantum information because they’re easier to hold on to, and say that their system could one day be harnessed for spy-proof communication using quantum cryptography, or for powerful quantum computers.

The befuddling process of quantum teleportation is made possible by the what Einstein called the “spooky” properties of quantum materials. Until it’s measured, an atom or photon can remain in an ambiguous state of all possible values simultaneously. Whenever a particle is measured, though, this range of possibilities “collapses” into a single, distinct value. The original, uncommitted state is lost, and it’s this ability to hold multiple values at once that gives [quantum materials] such potential for high-performance computing [Science News].

As researchers report in Science, the feat of derring-do was accomplished by first sequestering two charged ytterbium atoms in vacuum chambers three feet apart. Researchers then zapped one of the ions with a microwave pulse that put the ion’s electrons into a state of quantum uncertainty–using a binary framework, researchers say it was both a 1 and a 0 simultaneously. Next they directed laser pulses lasting just a trillionth of a second at both ions, causing them to give off one photon (packet of light) apiece. The wavelengths, or colors, of these photons depended on which states the electrons were in. Crossing these photons in a beamsplitter sometimes entwined the states of those electrons, a bizarre quantum phenomenon called entanglement [Science News].

Researchers determined whether the photons had become entangled by using a pair of detectors that triggered an alert only if the two photons were in a complementary state. If they were, that meant that the ytterbium ions were also entangled. Researchers then looked at the ion they had zapped, causing it to collapse out of its state of quantum uncertainty into one of two states, 1 or 0. Because the two ions were entangled, knowing the state of one gave researchers information about the state of the other. No information was sent directly from A to B. Instead, quantum entanglement was used to put the information into ion A and get it out again through ion B [MSNBC].

There’s still a ways to go before this technology has any practical application, however. The main problem is that the photons from the ytterbium ions only reach their fibre-optic cable once every 100 million tries — about once every ten minutes. “That’s pretty sucky,” [physicist Paul] Kwiat says. “It is embarrassing,” admits [study coauthor Chris] Monroe. It took three solid weeks of graduate students running the experiment around the clock to gather the necessary data for this paper. Still, when the photons did find their way into the cable, the success rate for the rest of the process was an impressive 90% [Nature News].