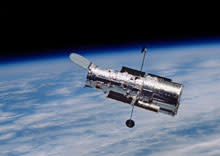 Just yesterday, the NASA engineers who are working on a remote-controlled reboot of the malfunctioning Hubble Space Telescope were thrilled with their progress: "Everything's going perfectly," a NASA spokeswoman said, and she estimated that the telescope would resume sending science data back to earth today. But today NASA reported that engineers had run into a problem while powering up the system after its reboot. After the Hubble's main data handling computer went on the fritz in late September, engineers devised a plan to switch over to the telescope's "Side B" backup computer, which had been dormant for 18 years. NASA said yesterday that the backup system was successfully brought up, and that the only task that remained was testing and calibrating the telescope's scientific instruments to ensure they were working properly with the new computer.

However on Friday NASA posted a notice on its website saying "the activation of the telescope's science instruments and resumption of observations has been suspended following two anomalies seen in systems on the telescope Thursday" [Reuters].

The problems began on Thursday afternoon, when engineers were starting up the instruments.

The sun shade that protects the advanced camera for surveys gave an anomalous voltage reading. Shortly afterwards, the [Hubble's] main CPU failed to detect what's called a "keep alive" signal from the science instruments, and put the telescope in safe mode. At this point, it's not clear whether these two problems are related or not [Ars Technica].

The Hubble remains in standby mode while NASA conducts its investigation, but engineers did successfully conduct a memory dump of all the systems' status at the moment they went into safe mode; that data

suggests that there is a “potential problem in the Side B.” There were no further details, but NASA said that it is investigating the problems and will provide more details when they become available [TG Daily].