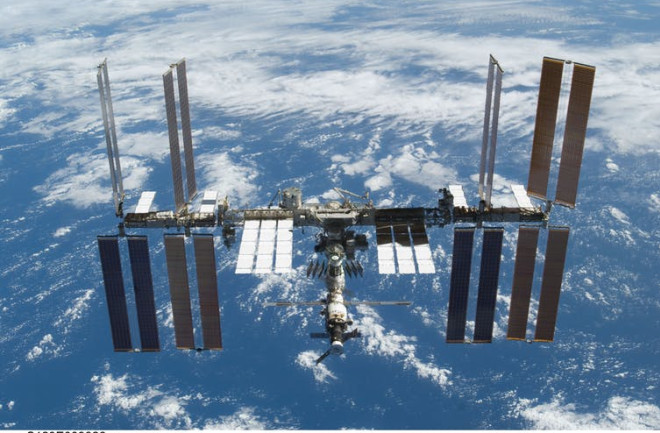 The International Space Station passing over part of the western Mediterranean in 2009. (Credit: NASA)

I've written about Thierry Legault's phenomenal imagery of space before; with relatively modest equipment, but excellent foresight, he gets astronomical shots of surpassing beauty. He sent me a note earlier that he had something new and cool, and he wasn't kidding: a video of the ISS in 3D!

To see it in 3D you don't need glasses; it's a bit like those Magic Eye posters. Look at the video, and cross your eyes slightly to merge the left and right images into one. Then hit play (move your mouse into the frame to get the video controls). It may take you a while to get the hang of it, but it's worth the effort! I found it easiest to do when my eyes were about 50 cm (18 inches) from my monitor; for reference, on my screen the image of the ISS is about 8 cm (3 inches) high.

What you're seeing here is actually only one video of the ISS. As it orbits the Earth, the ISS actually keeps the same attitude — that is, the same physical orientation. It only seems to rotate because Thierry centered it in the video.

Take an orange or something like it in your hand, and move it straight across your field of vision. If you start on the right, you'll be able to see more of the left side of the orange; as you move it to the left you'll start to see more of the right side of the orange. It's as if it's rotating, but really you're just changing the angle between you and the two sides of the orange. If you keep your head pointed right at the orange as it passes, you can see this more clearly. Note that it gets bigger as it gets closer, just as the ISS does in the video.

What Thierry did then was pretty tricky: he offset the left video in time a bit from the one on the right. We see 3D with our eyes because the angle from our left eye to an object is slightly different than the angle using our right eye (this effect is called parallax). Our brain processes these slightly different angles to construct an object with depth — it's how all 3D works, from red-green anaglyphs to movies in the theater.

And since the ISS was apparently rotating with time in the video, all Thierry had to do was offset the two videos a bit to trick the brain into thinking it's seeing two different angles from your eyes; the brain does the rest.

Note that the ISS was over 300 km away when he took these shots on April 24th from France. It was also moving at over a degree per second across the sky, which is pretty fast.

To make the animation cleaner, he took every 15 frames and combined them, a standard practice to make fuzzy images somewhat sharper. He also sped the animation up 2.5 times. This video is extremely well done, and a fantastic exercise in clever thinking. Thierry continues to amaze me every time he does something new ... but he'll have a hard time topping this!