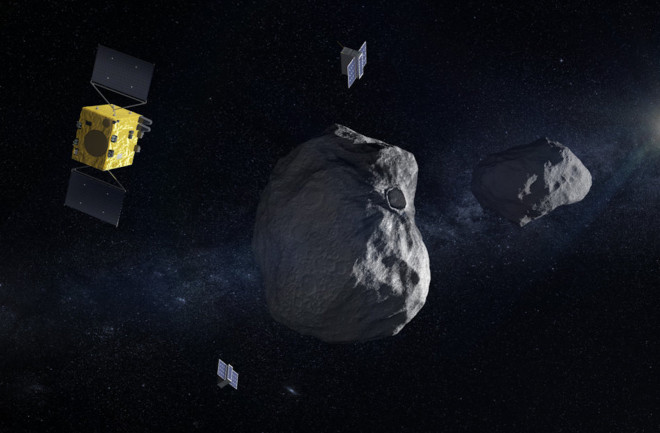 This artist's impression shows ESA's Hera mission looming above asteroid 65803 Didymos. (Credit: ESA - ScienceOffice.org) Asteroid exploration has been all the rage lately, and the European Space Agency (ESA) isn’t missing out on the fun. On February 4, ESA released new details about its upcoming Hera mission — the first spacecraft to explore a binary asteroid. The mission will launch to asteroid 65803 Didymos, a binary pair made up of one large body and a smaller object that orbits around it, in 2023. Aptly nicknamed Didymoon, the smaller of the two stretches just 525 feet (160 meters) in diameter — making it the tiniest asteroid ever targeted for exploration.

When it comes to the asteroids we’ve visited, Didymos is definitely on the smaller side. Its larger half is just 2,600 feet (780 meters) in diameter, which pales in comparison to asteroids like 253 Mathilde, which is over 30 miles (50 kilometers) wide and was visited by NASA’s Near Earth Asteroid Rendezvous (NEAR) mission in 1997. In fact, only two of the asteroids we’ve probed are smaller than Didymos. Asteroid Bennu, which is currently being studied by NASA’s OSIRIS-REx spacecraft, measures just 1,600 feet (500 meters) across. And Itokawa, investigated by JAXA’s Hayabusa mission in 2005, stretches only 1,150 feet (350 meters). With Didymoon spanning less than half of that, it will by far be the smallest asteroid ever explored.

With the exception of asteroid Bennu, whose photo will be added later this year, this montage shows the 18 comets and asteroids that have been photographed up-close by spacecraft. (Credit: Planetary Society – Emily Lakdawalla)

But while Hera will be the first to explore Didymos, it won’t be the first to arrive at Didymos. In 2022, the Double Asteroid Redirection Test (DART) mission will target Didymoon as part of NASA's Planetary Defense program, which aims to protect Earth from potentially hazardous comets and asteroids. DART will test its ability to deflect asteroids by crashing into Didymoon and altering its orbit around Didymos. NASA selected Didymoon because of its close proximity to Earth and its surprisingly dangerous size. Asteroids like Didymoon are quite small, so they can be hard to see, but they're still large enough to break through Earth's atmosphere and cause significant damage when they hit the ground. Learning how to deflect these small, near-Earth objects could someday save us from a devastating asteroid impact.

After DART’s mission is complete, Hera will arrive in 2026 to analyze the binary pair. The craft will measure their masses, note their surface properties and study Didymoon’s new orbit and impact site. Equipped with CubeSats to explore their surfaces, Hera will be the first mission to get an up close and personal look at a binary system, which make up about 15 percent of known asteroids. These stats will not only give insight into how DART worked, but will also help us understand the formation and evolution of binary asteroids.