The discovery could answer a long-standing question about how light first traveled freely through the infant universe. 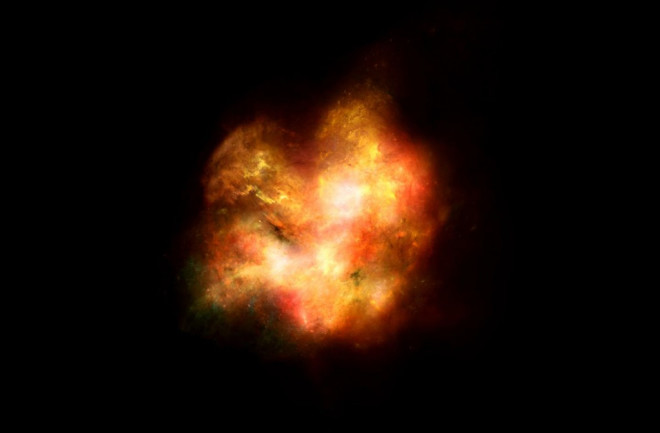 The first galaxies shone bright and hot, lighting up the cosmos around them. (Credit: James Josephides)

Our universe’s first galaxies shone hotter and brighter than scientists thought, according to a group of astronomers who tapped a whopping 400 hours of observing time on NASA’s Spitzer Space Telescope. The discovery could answer a long-standing question about how light first traveled freely through the infant universe.

“We did not expect that Spitzer, with a mirror no larger than a Hula-Hoop, would be capable of seeing galaxies so close to the dawn of time,” study author Michael Werner said in a statement.

Werner is Spitzer’s project scientist at NASA's Jet Propulsion Laboratory in Pasadena, California. “But nature is full of surprises," he added, "and the unexpected brightness of these early galaxies, together with Spitzer's superb performance, puts them within range.”

After the Big Bang, our universe was mostly gas. It took some 100 to 200 million years for the first stars to form. And it took another billion years or so for those suns to come together as the first galaxies.

But for most of this period, the universe was packed with cold hydrogen gas. Some kinds of light can pass through such gas uninhibited. But higher-energy radiation, like ultraviolet light and gamma-rays, gets absorbed immediately. That stops this light from streaming freely across space where one day, billions of years in the future, it might strike an Earth observer’s telescope.

And as these first stars and galaxies started filling our early universe with high-energy radiation, all that gas was saturated with light until it just couldn't absorb any more, and light began racing freely across the cosmos. This transition is known as the epoch of reionization, and it marks the cloudy edge of cosmic history, past which astronomers will never see.

Researchers understand this barrier and its cause in general terms. But exactly when this ionization happened, and how, has remained a puzzle. And astronomers still debate the specific sources of all that radiation. That's why these new observations are important. Spitzer’s deep look let astronomers see specific wavelengths of light from the universe’s earliest galaxies.

The results show that the first galaxies were extremely light in “metals,” which is what astronomers call any elements beyond hydrogen and helium. The discovery also implies that the stars within those galaxies then held few heavy elements, which helped them burn hot and churn out the kind of ionizing radiation that would clear the gas' veil from our cosmos.

These hot stars formed the early galaxies that Spitzer studied, making them brighter than today's galaxies, and brighter than astronomers had expected. Researchers led by Stephane De Barros, from the University of Geneva in Switzerland, published their study April 4 in Monthly Notices of the Royal Astronomical Society.

While some examples of such surprisingly bright galaxies have been spied before in previous searches, the Spitzer survey (called GREATS, and based on a Hubble survey called GOODS) included 135 early galaxies. This tells astronomers that such brightness was common in these early galaxies, and not a trait belonging to a few spectacular outliers. It's still not clear if these bright galaxies could ionize the universe all on their own, or if extra sources of light ⁠— like the radiation that roils off actively feeding black holes at the center of galaxies — might also be responsible.

But telescopes like James Webb, due to launch in 2021, will be more than seven times larger than Spitzer, and able to study the universe's early days in even greater detail. Perhaps one day, astronomers will have a true answer as to what objects were responsible for turning on the lights in the cosmos.