Do We Live in the Matrix?

Tests could reveal whether we are part of a giant computer simulation — but the real question is if we want to know ... 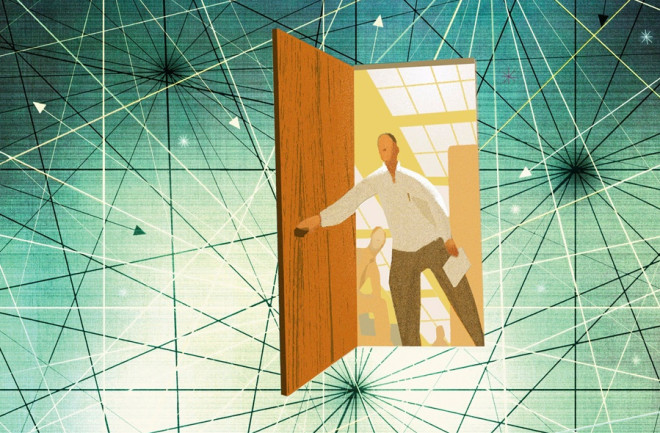 In the 1999 sci-fi film classic The Matrix, the protagonist, Neo, is stunned to see people defying the laws of physics, running up walls and vanishing suddenly. These superhuman violations of the rules of the universe are possible because, unbeknownst to him, Neo’s consciousness is embedded in the Matrix, a virtual-reality simulation created by sentient machines.

The action really begins when Neo is given a fateful choice: Take the blue pill and return to his oblivious, virtual existence, or take the red pill to learn the truth about the Matrix and find out “how deep the rabbit hole goes.”

Physicists can now offer us the same choice, the ability to test whether we live in our own virtual Matrix, by studying radiation from space. As fanciful as it sounds, some philosophers have long argued that we’re actually more likely to be artificial intelligences trapped in a fake universe than we are organic minds in the “real” one.

But if that were true, the very laws of physics that allow us to devise such reality-checking technology may have little to do with the fundamental rules that govern the meta-universe inhabited by our simulators. To us, these programmers would be gods, able to twist reality on a whim.

So should we say yes to the offer to take the red pill and learn the truth — or are the implications too disturbing?

Worlds in Our Grasp

The first serious attempt to find the truth about our universe came in 2001, when an effort to calculate the resources needed for a universe-size simulation made the prospect seem impossible.

Seth Lloyd, a quantum-mechanical engineer at MIT, estimated the number of “computer operations” our universe has performed since the Big Bang — basically, every event that has ever happened. To repeat them, and generate a perfect facsimile of reality down to the last atom, would take more energy than the universe has.

“The computer would have to be bigger than the universe, and time would tick more slowly in the program than in reality,” says Lloyd. “So why even bother building it?”

But others soon realized that making an imperfect copy of the universe that’s just good enough to fool its inhabitants would take far less computational power. In such a makeshift cosmos, the fine details of the microscopic world and the farthest stars might only be filled in by the programmers on the rare occasions that people study them with scientific equipment. As soon as no one was looking, they’d simply vanish.

In theory, we’d never detect these disappearing features, however, because each time the simulators noticed we were observing them again, they’d sketch them back in.

That realization makes creating virtual universes eerily possible, even for us. Today’s supercomputers already crudely model the early universe, simulating how infant galaxies grew and changed. Given the rapid technological advances we’ve witnessed over past decades — your cell phone has more processing power than NASA’s computers had during the moon landings — it’s not a huge leap to imagine that such simulations will eventually encompass intelligent life.

“We may be able to fit humans into our simulation boxes within a century,” says Silas Beane, a nuclear physicist at the University of Washington in Seattle. Beane develops simulations that re-create how elementary protons and neutrons joined together to form ever larger atoms in our young universe.

Legislation and social mores could soon be all that keeps us from creating a universe of artificial, but still feeling, humans — but our tech-savvy descendants may find the power to play God too tempting to resist.

If cosmic rays don't have random origins, it could be a sign that the universe is a simulation. (Credit: J. Yang/NSF)

They could create a plethora of pet universes, vastly outnumbering the real cosmos. This thought led philosopher Nick Bostrom at the University of Oxford to conclude in 2003 that it makes more sense to bet that we’re delusional silicon-based artificial intelligences in one of these many forgeries, rather than carbon-based organisms in the genuine universe. Since there seemed no way to tell the difference between the two possibilities, however, bookmakers did not have to lose sleep working out the precise odds.

That changed in 2007 when John D. Barrow, professor of mathematical sciences at Cambridge University, suggested that an imperfect simulation of reality would contain detectable glitches. Just like your computer, the universe’s operating system would need updates to keep working.

As the simulation degrades, Barrow suggested, we might see aspects of nature that are supposed to be static — such as the speed of light or the fine-structure constant that describes the strength of the electromagnetic force — inexplicably drift from their “constant” values.

Last year, Beane and colleagues suggested a more concrete test of the simulation hypothesis. Most physicists assume that space is smooth and extends out infinitely. But physicists modeling the early universe cannot easily re-create a perfectly smooth background to house their atoms, stars and galaxies. Instead, they build up their simulated space from a lattice, or grid, just as television images are made up from multiple pixels.

The team calculated that the motion of particles within their simulation, and thus their energy, is related to the distance between the points of the lattice: the smaller the grid size, the higher the energy particles can have. That means that if our universe is a simulation, we’ll observe a maximum energy amount for the fastest particles. And as it happens, astronomers have noticed that cosmic rays, high-speed particles that originate in far-flung galaxies, always arrive at Earth with a specific maximum energy of about 1020 electron volts.

The simulation’s lattice has another observable effect that astronomers could pick up. If space is continuous, then there is no underlying grid that guides the direction of cosmic rays — they should come in from every direction equally. If we live in a simulation based on a lattice, however, the team has calculated that we wouldn’t see this even distribution. If physicists do see an uneven distribution, it would be a tough result to explain if the cosmos were real.

Astronomers need much more cosmic ray data to answer this one way or another. For Beane, either outcome would be fine. “Learning we live in a simulation would make no more difference to my life than believing that the universe was seeded at the Big Bang,” he says. But that’s because Beane imagines the simulators as driven purely to understand the cosmos, with no desire to interfere with their simulations.

Unfortunately, our almighty simulators may instead have programmed us into a universe-size reality show — and are capable of manipulating the rules of the game, purely for their entertainment. In that case, maybe our best strategy is to lead lives that amuse our audience, in the hope that our simulator-gods will resurrect us in the afterlife of next-generation simulations.

The weird consequences would not end there. Our simulators may be simulations themselves — just one rabbit hole within a linked series, each with different fundamental physical laws. “If we’re indeed a simulation, then that would be a logical possibility, that what we’re measuring aren’t really the laws of nature, they’re some sort of attempt at some sort of artificial law that the simulators have come up with. That’s a depressing thought!” says Beane.

This cosmic ray test may help reveal whether we are just lines of code in an artificial Matrix, where the established rules of physics may be bent, or even broken. But if learning that truth means accepting that you may never know for sure what’s real — including yourself — would you want to know?

There is no turning back, Neo: Do you take the blue pill, or the red pill?

Tantalizingly, just weeks before The Matrix came out in 1999, astronomers analyzing the light from distant galaxies published hints that the universe’s “constants” might not be so constant. Specifically, they found that the value of the fine-structure constant — which determines how the galaxies’ light should appear — is one thousandth of a percent bigger today than it was 10 billion years ago.

Glitches caused by our simulation being patched up could also be at the root of truly bizarre results that defy the normal rules of physics. One such possible effect appeared in 2011, when physicists working on the OPERA experiment in Europe made headlines as they claimed to have measured subatomic particles called neutrinos traveling faster than the speed of light, considered the universal speed limit.

Unfortunately, neither case proved a slam-dunk for a virtual universe. Independent tests could not back up the fine-structure constant data, and the speedy neutrinos turned out to be due to a faulty experimental setup. But there is a more fantastical explanation: These inconstant-constants may have instead been simulation glitches, glimpsed just before our programmers fixed them.