Discovery spacewalk seen from the ground

I should copyright the phrase, "Thierry Legault has done it again!" because he does keep seeming to do it again! He is an "amateur" astronomer in Europe, and takes phenomenal pictures of spacecraft from the ground. And this one is pretty incredible: it shows NASA astronaut Steve Bowen doing a spacewalk during Discovery's last flight to the space station! 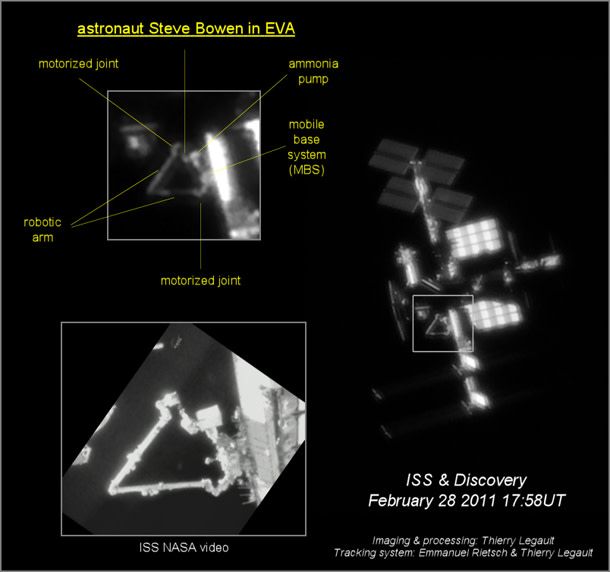 Wow. In space, you can orbit but you can't hide. [Click to enastronautenate.] Thierry helpfully annotated the picture. The body of the station is to the right, and the bent joint of the robotic arm is obvious. The big blob labeled ammonia pump is just that; a pump that has failed, which Bowen was moving to a storage location. Just next to it, on the left, is a blurry but distinct blob that is a living, breathing astronaut in space! Thierry included a still from a NASA video to provide further support that what you are seeing is actually a man orbiting the Earth at nearly 30,000 kph.

[UPDATE: Thierry just informed me that as far as he can tell, this is the first clear shot of an astronaut ever seen from the ground. There have been claims in the past (like this one from 2009), but they have been very blurry and unable to be confirmed. Thierry's still frame from the NASA video makes it clear he truly did see Bowen in his image. I did a quick search and was unable to find any other pictures taken from the ground that unequivocally show an astronaut. So, to Thierry: congrats!]

I am a rational person, or at least I try to be. I know the equipment Thierry used, the size of the space station, and the distance to it. It's a simple matter of math to understand that an object as small as a man in a spacesuit can be seen from the ground, and distinguished from other objects nearby. But to actually see it in a picture like this is thrilling. Simply wonderful. Image credit: Thierry Legault, used with permission.

The SciencesFrom the Crew Dragon to Mars: Cady Coleman on NASA's Path Forward
Recommendations From Our Store