Detoured Light From Tycho's Supernova Finally Makes it to Earth 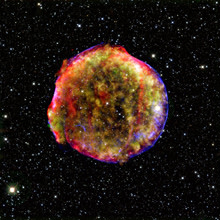 A supernova first observed in the 16th century by Danish astronomer Tycho Brahe has been sighted again, astronomers report. Brahe observed its direct light but "light echoes" from the supernova

that took a long detour around the universe have finally made it to Earth and have been captured by the Subaru Telescope in Hawaii. The new observations confirm that the supernova was the explosion of a white dwarf star.

"Using light echoes in supernova remnants is time-traveling in a way, in that it allows us to go back hundreds of years to observe the first light from a supernova event," said Tomonori Usuda, lead project astronomer at Subaru [Space.com].

In November 1572, Brahe noted a new shimmer in the night sky and thought it was the birth of a new star. But the shimmer disappeared 16 months later and some claimed it was a comet. Only in the early 20th century did astronomers understand that the fleeting brightness was a supernova and represented not the birth but the death throes of a star.

The direct light from the supernova swept past Earth long ago. But some of it struck dust clouds in deep space, causing them to brighten [AP].

These light echoes are what astronomers have now captured and reported in Nature [subscription required].

"What we have essentially done here is to use interstellar dust as a kind of a mirror," says [co-author] Oliver Krause [Nature News].

Studying the light's spectrum, scientists have confirmed that Tycho's supernova, or SN 1572, was a Type 1a, a category of supernova created by the explosion of small, dense stars called white dwarfs. They are believed to explode with a standard brightness, which makes them a good tool for gauging the distance to far-off galaxies [Nature News].

Thanks to modern telescopes, many supernova have been observed, but SN 1572 is the oldest one ever seen in the Milky Way.

“Usually these objects happen very distantly. The only thing is the bright flash of the supernova and then it’s gone,” said Krause... “You cannot determine the progenitor, and you also cannot say what happens afterward. Now the nice thing here is this explosion happened a long time ago, and now its supernova remnant is visible” [Wired Science].

SN1572's reappearance could help astronomers study Type 1a supernovae as well as the the mysterious "dark energy" that seems to be pushing galaxies farther apart from each other. Even though Brahe never figured out the true origin of his "new star," the observation marked the beginning of an illustrious career that produced the most accurate astronomical observations of his time. All of his work was accomplished without the aid of telescopes, which were invented several years after his death in 1601. Related Content: 80beats: Mysterious Stellar Blast in the 1840s Was a "Supernova Imposter" DISCOVER: Sliced: Inside a Supernova DISCOVER: One Spectacular Stellar DeathImage: Max Planck Institute for Astronomy

The SciencesThorne-Żytkow Objects: When a Supergiant Star Swallows a Dead Star
Recommendations From Our Store