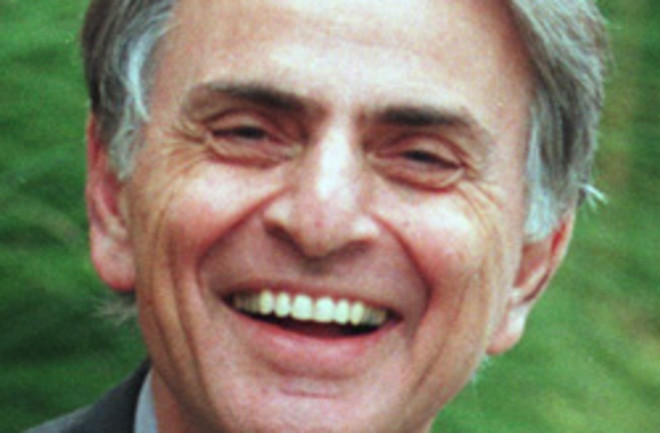 Today is Carl Sagan's 75th birthday. It would be nice if he were still around to send him the greeting personally, but sadly, he died too young: in 1996 he succumbed to complications of myleodysplasia. As he himself noted, though, the progress of science -- medical science in this case -- kept him alive far longer than would otherwise have been possible. Up to the end, he was an evangelist of science. And his legacy continues. His TV show "Cosmos" continues to inspire people, and the generation of astronomers who took up the cause due to Sagan's exhortations are still looking up, looking out, and seeking what's around the next corner. Because of Carl Sagan, we have many more scientists who not only love the field itself, but strive to express it to others. I include myself among the latter. That's why we celebrated Carl Sagan Day on Saturday, to honor the man and, in my opinion just as if not more importantly, to continue his work. James Randi knew Sagan personally; they were friends for many years, and so at the celebration Randi was the keynote speaker, relating stories about the man whom Randi knew as simply Carl. Below is video of Randi's talk. It's an hour long, but it's more than worth your time. This was recorded off a live stream, so go ahead and click forward to about the 9:00 minute mark to get started. This first Carl Sagan Day was a great success. We had a great audience at every talk, kids playing outside in the inflatable rocket ship bounce room, pictures from Hubble adorning the windows and walls of Broward College, and an overall sense that there is great work that has been done, with still a vast amount yet to do. But that's where the fun is. Sagan knew that, and I hope that you do too. And if you don't -- if you think science is stodgy, uninteresting, and doesn't affect your life -- then hopefully you have an amazing moment lying in wait for you. Maybe it'll be a Cassini image of Saturn, or a tiny cell undergoing mitosis under your scrutiny through a microscope, or the sudden understanding from a news article about the Large Hadron Collider. There's no way to know what precisely that trigger will be. But at some point there will come something that will jolt you, will shake you out of your complacence, and the scales will fall from your eyes. At that moment you'll experience what Carl Sagan did every moment of his life, that same sense of wonder and pure, undiluted joy about the Universe. I feel it too. It's the blood in my veins, the calcium in my bones, the electricity of my eyes and ears as they relay what they detect to my brain. It's the sense of connectedness with everything, and it's real. That's what Carl Sagan taught us.

Somewhere, something incredible is waiting to be known.