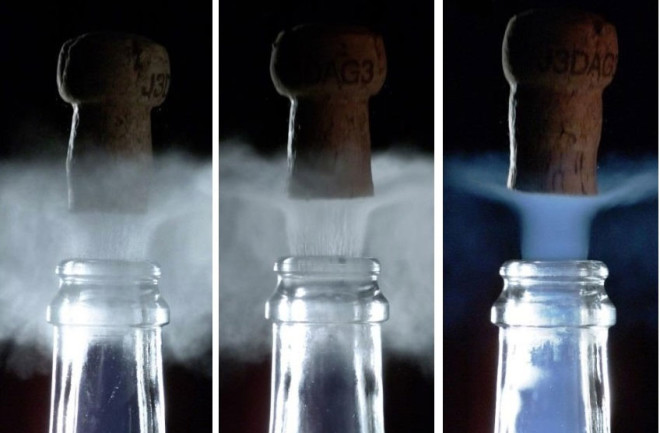 From left, the vapor above the bottlenecks of bottles stored at 6 °C, 12 °C and the deep blue CO2 freezing plume from a bottle stored at 20 °C. (Credit: Equipe Effervescence, Champagne et Applications/URCA) Looking for a new party trick? In a study published in Scientific Reports researchers demonstrated that storing your champagne bottles at different temperatures can change the shape and even the color of the fog plume that’s released after that characteristic “pop.” Ah, the bubbly. Aside from being one of our favorite celebratory beverages, champagne has also been the subject of extensive scientific study – no, really. French scientist and champagne physicist Gérard Liger-Belair studies the conditions behind the taste, tingle and the visible “sparkle” in our flutes. “The heart of champagne lies in the bubbles,” said Liger-Belair in an interview with Phys.org. He also said that in each bottle, there are approximately 10 million bubbles.Not with a fizzle, but with a bang When a champagne bottle is opened, the “fizz,” which is technically known as effervescence, rushes out through the bottleneck in a gaseous mixture. According to the study, this mixture undergoes an adiabatic expansion—the gases expand causing the temperature to drop. This then cools the surrounding air, condensing the water vapor and forming the white-grey fog or cloud that escapes the bottle once the cork is popped.

Time sequences showing the cork popping process from bottles stored at three different temperatures (from top), 6 °C, 12 °C and 20 °C. Using high-speed video imaging to record this process, Liger-Belair and his colleagues were able to observe the effects different temperatures had on the resulting plumes. In the experiment, bottles of champagne were stored at 6, 12 and 20 degrees Celsius. The team found that temperature played a bigger role in the condensation of the vapors than they’d previously thought, and it also impacted the way the clouds formed when released from the bottles. Bottles stored at 20 degrees Celsius ended up losing the customary white-grey cloud as it was replaced with transient blue fog. The researchers speculated that this reaction was caused by clusters of ice water that gathered after adiabatic expansion occurred in the bottles stored at warmer temperatures. In short: the colder the liquid, the bolder the cloud. And, for the sake of avoiding a reproducibility crisis, all that's left for you to do is chill some champagne and repeat this experiment at home.