Wanna go to space? You can, but it'll cost you over 300 grand. At least, it will if you do it through the Austrian Penny Markt, which just opened a travel business. 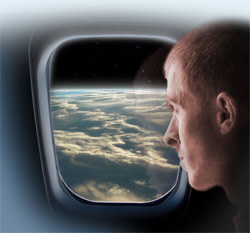 And travel it is: for $314,000 you'll train in Oklahoma for five days, then board a Rocketplane XP flown by Rocketplane Global. Once aloft, you'll be taken to 105 kilometers high -- just above the official 100 km limit into space -- where you'll get a precious few minutes of microgravity. Then it's back to Earth. Personally, I have no desire to do this. I want to be in space, but I don't want to have to go to space to get there. Strapping myself in a rocket seems like a bad idea to me, since I get sick on playground swings. But if you are made of sterner stuff, start saving your pfennigs (OK, Euros). The trips are promised to start at the end of 2011, though more likely it'll be sometime in 2012. I'll wave to you from here. Tip o' the spacesuit visor to Gábor Török.