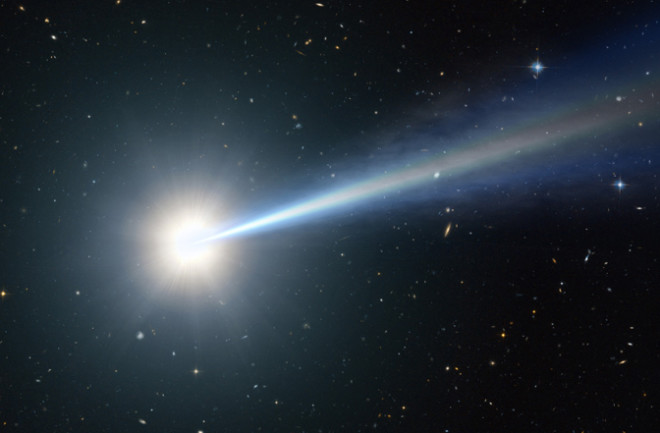 Dust partially obscures a distant quasar in this artist's illustration. (Credit: NASA/ESA/G.Bacon, STScI) With the help of two extremely bright quasars located more than 7 billion light-years away, researchers recently bolstered the case for quantum entanglement — a phenomenon Einstein described as "spooky action at a distance" — by eliminating one classical alternative: The freedom-of-choice loophole.

Of the many mindboggling facets of quantum mechanics, one of the most intriguing is the idea of quantum entanglement. This occurs when two particles are inextricably linked together no matter their separation from one another. Although these entangled particles are not physically connected, they can still able to share information with each other instantaneously — seemingly breaking one of the most hard-and-fast rules of physics: No information can be transmitted faster than the speed of light. As far-out as the idea seems, quantum entanglement has been proven time and time again over the years. When researchers create two entangled particles and independently measure their properties, they find that the outcome of one measurement influences the observed properties of the other particle. But what if the apparent relationship between particles is not due to quantum entanglement, but instead is a result of some hidden, classical law of physics? In 1964, physicist John Bell addressed this question by calculating a theoretical limit beyond which correlations can only be explained by quantum entanglement, not classical physics. However, as is often the case, there are loopholes.

One of the most stubborn of these loopholes is the so-called "freedom-of-choice" loophole, which suggests a hidden classical variable can influence how an experimenter decides to measure seemingly entangled particles. This causes the particles to appear quantumly correlated even when they are not. To help constrain the impact of the freedom-of-choice loophole, the authors of the new study used extremely distant quasars (exceptionally bright and energetic galactic cores) to decide which properties of entangled particles to measure. By allowing the quasars' light to "choose" what properties to measure, the researchers effectively removed the freedom-of-choice loophole from the experiment. This is because the quasars are located 7.8 and 12.2 billion light-years away, so their observed light was emitted billions of years before the researchers even conceived of the experiment. “If some conspiracy is happening to simulate quantum mechanics by a mechanism that is actually classical, that mechanism would have had to begin its operations — somehow knowing exactly when, where, and how this experiment was going to be done — at least 7.8 billion years ago," said co-author Alan Guth, a physics professor at MIT, in a press release. "That seems incredibly implausible, so we have very strong evidence that quantum mechanics is the right explanation." In fact, according to Guth, the probability that a classical process could explain their results is about 1 in 100 billion billion. “The Earth is about 4.5 billion years old, so any alternative mechanism — different from quantum mechanics — that might have produced our results by exploiting this loophole would’ve had to be in place long before even there was a planet Earth," adds co-author David Kaiser of MIT. “So we’ve pushed any alternative explanations back to very early in cosmic history.”

This graphic shows the experimental setup used to test the freedom-of-choice loophole. Researchers produce two entangled photons (middle) and shoot them in opposite directions toward detectors located at each telescope. The telescope then use ancient quasar light to determine which properties of the photons to measure.(Credit: D. Rauch et al. [Phys. Rev. Lett. 121, 080403])

To carry out the study, the team utilized two 4-meter-wide telescopes — the William Herschel Telescope and the Telescopio Nazionale Galileo — located just over half a mile (1 kilometer) apart on a mountain in La Palma, Spain. Both telescopes were trained on different quasars located billions of light-years away. Meanwhile, at a station between these two telescopes, the researchers generated pairs of seemingly entangled photons — or particles of light — and beamed one member of each pair to a detector at each telescope. As the entangled photons traveled to the detectors, the telescopes analyzed light from the quasars and determined whether the light was more red or more blue than a baseline. Depending on the measurement, the entangled-photon detectors automatically adjusted the angle of their polarizers, which are devices that measure the orientations of photon electric fields. This allowed the researchers to test whether the photon pairs were truly linked to one another, or if they were just faking it. Over the course of two 15-minutes experiments (each utilizing two different pairs of quasars), the researchers measured over 17,000 and 12,000 pairs of entangled photons, respectively. According to the study, the results show it is extremely unlikely a classical mechanism is responsible for the strong correlations observed between the photon pairs, meaning the photon pairs truly were quantumly entangled.

This experiment is not the first time the freedom-of-choice loophole has been tested. Just last February, the same team of researchers led a similar study that used 600-year-old starlight to determine which photon properties to measure. And although the new research uses light that is nearly 8 billion years older, there still remains a small window of time for the freedom-of-choice loophole to slip through. In order to close this window completely, the researchers are already planning to look back even further in cosmic time, concentrating on the earliest light in the universe — photons from the cosmic microwave background. “It is fun to think about new types of experiments we can design in the future, but for now, we are very pleased that we were able to address this particular loophole so dramatically," said Kaiser. "Our experiment with quasars puts extremely tight constraints on various alternatives to quantum mechanics. As strange as quantum mechanics may seem, it continues to match every experimental test we can devise."