The Australian SKA Pathfinder radio telescope is the first to pinpoint the source of a non-repeating FRB. 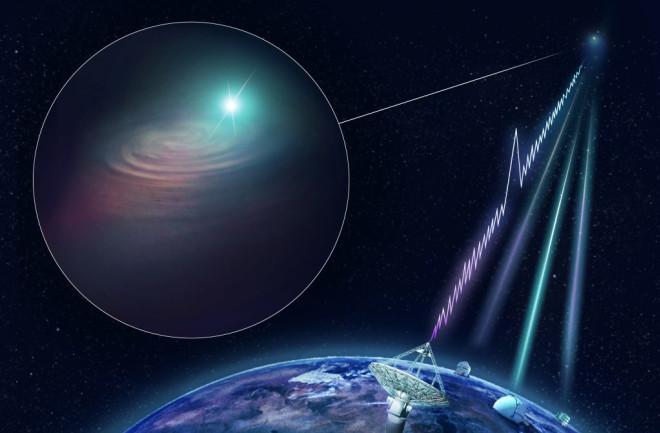 Fast Radio Bursts are one of space’s great mysteries. Discovered for the first time only in 2007, they are massively powerful bursts of radio waves that last for just a fraction of a second. The vast majority of these signals occur once, and then never happen again – making them especially hard to track and study. Scientists know that whatever produces the FRBs must be a highly energetic event, but without knowing where these busts come from, the actual creation of these brilliant flashes remains unknown.

In 2017, researchers tracked one burst, called FRB 121102, to a tiny yet active galaxy. But that was an even rarer repeating FRB, which gave scientists multiple tries at pinning down its location.

Now, astronomers using Australia’s Square Kilometer Array Pathfinder radio observatory (ASKAP) have managed to zero in on the location of a non-repeating burst, FRB 180924. Finding it was a much tougher challenge. They discovered that the FRB came from a quiet galaxy entirely unlike that of the repeating burst, making the finding both exciting and unexpected. The research, led by Keith Bannister from Australia’s Commonwealth Science and Industrial Research Organization (CSIRO), was published Thursday in the journal Science.

The FRB’s host galaxy was imaged by the Very Large Telescope in Chile. Astronomers pinpointed the FRB to within the black circle at the galaxy’s outskirts. (Credit: Bannister et al. 2019)

For a dozen years, astronomers have been drawn to FRBs by their extremely bright and mysterious nature. “If you put one of these at the sun, you could pop popcorn on Neptune,” Bannister says. “They’re amazingly bright.”

And while there are something like 1,000 FRBs every day, astronomers can’t watch the whole sky all at once. Most FRBs flash for a few milliseconds and then never again, so catching one is a matter of luck and patience.

The ASKAP array has been at the forefront of this FRB search. Made of 36 telescopes spread over nearly four miles, the observatory has discovered almost one-third of the 86 known FRBs. Most of the time, the 36 telescopes spread their gaze across the sky, looking at a wide field. But for this latest discovery, the telescopes happened to be pointing in the roughly same direction, observing an area that covered just one-tenth of one percent of the sky.

That tiny slice makes it less likely to catch an FRB. But it also meant that when the signal arrived, the network had 36 different telescopes observing it. The system is set to automatically identify a FRB within a half second, at which point every receiver freezes and sends the last three seconds of observations, which researchers can then comb over like referees checking 36 separate instant replay devices.

The radio waves traveled very slightly different distances to reach each telescope, so they struck each receiver at a different time and angle. That let astronomers triangulate the FRB’s origin.

Researchers then used data from some of the world’s largest optical telescopes — Keck in Hawaii and Gemini South and the European Southern Observatory’s Very Large Telescope, both in Chile — to image the region and learn more about the FRB’s home.

Astronomers found that this FRB came from a quiet, elderly galaxy nearly 4 billion light-years away, designated only as DES J214425.25−405400.81. Nearly the size of the Milky Way, this galaxy doesn’t have much gas – the fuel for star formation – and seems to be mostly finished making new stars. That rules out a lot of possibilities for what might cause a FRB, since young stellar populations are where astronomers usually see exciting, high-energy events like supernovas that might plausibly make a FRB.

Even more interestingly, they traced the FRB to the outskirts of the galaxy, some 13,000 light-years from its center. That matters because the supermassive black holes that reside at the center of most large galaxies were thought to be another possible way to fire off an FRB. But it’s not possible in this case, thanks to the large offset from the galaxy’s center.

The only other FRB to ever be traced to its source was a repeating burst, one of only two so far discovered. Scientists aren’t sure if repeaters are caused by the same kind of event as these solo bursts, but the two examples they have – one repeating, one not – are as different as can be.

In 2017, researchers traced the repeating FRB to a tiny dwarf galaxy one thousand times smaller than the Milky Way, which churns out new stars at a high rate. What’s more, even when this prior FRB source is quiet, its galaxy sends out a persistent, though quieter, radio signal that matches up with the location of the FRB.

“When we look,” Bannister says of his new lone FRB, “there’s no persistent radio source.”

About the only thing the two sources have in common is that they’re short, bright radio bursts, and that they’re coming from outside the Milky Way. “It’s either, there’s a huge continuum … or they’re just a different class of object entirely,” says Bannister of the two FRBs.

One of the mechanisms still on the table for creating FRBs is the creation of a magnetar, the dense core leftover after the death of a massive star that sends out powerful magnetic signals. They usually happen at the end of a large star’s (short) lifetime, but they can also form when two white dwarfs – the remnant cores of two smaller, longer-lived stars – collide with one another. That scenario is more likely in the older galaxy hosting Bannister’s FRB. But it’s still just a theory. “There’s not a lot of strong models saying it has to be this or that,” Bannister says.

The Future of FRBs

One of the reasons researchers are so interested in FRBs is their use in cosmology. The universe has a missing matter problem. Astronomers can’t account for all the normal matter – gas, dust, and stars – that should be in the cosmos.

This is entirely separate from the dark matter problem, which is about material only detectable through gravity, or the dark energy problem, which says some poorly understood type of force is pushing the cosmos apart.

Instead, the missing matter problem is simply that, according to cosmological tests, including observations by the Planck telescope, the universe should contain more material than scientists can measure by tallying up all the stars, dust, and gas they can see.

They strongly suspect it’s simply cold gas lurking between galaxies, called the intergalactic medium, or IGM. Because this gas doesn’t light up and isn’t especially dense, it’s hard to trace. But astronomers know some of it’s out there, because it absorbs light passing through it.

The perfect investigative tool would be a bright flash from a long distance. Astronomers could use it to probe the material between the source and its arrival on Earth. FRBs provide exactly that tool, if researchers can figure out where they come from.

In this case, the astronomers can account for the gas the FRB traveled through as it zipped through the Milky Way, and they can see that there’s not much gas in the FRB’s home galaxy. That leaves the IGM it traveled through on its way.

But that’s just one measurement. Many more will be needed to truly get a handle on the missing mass problem, and that means better understanding what causes FRBs and how they can be traced.

Now, scientists have to be patient, and wait for more of these bright flashes. And their telescopes are still watching the skies.