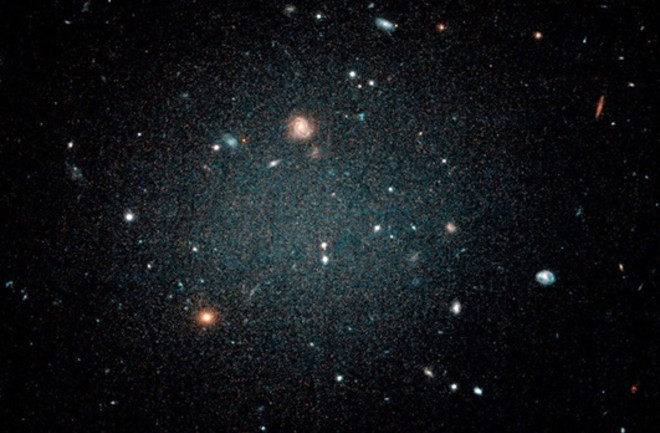 GC1052-DF2 is a large, but very diffuse galaxy located some 65 million light-years away. The galaxy is thought to contain a negligible amount of dark matter. This image was captured by the Advanced Camera for Surveys on the Hubble Space Telescope. (Credit: NASA/ESA/P. van Dokkum (Yale University))

Some 60 million light-years from Earth, not too far from our local galactic neighborhood, a strange little galaxy is causing a cosmic stir. This little island universe holds far fewer stars than your average galaxy. But it’s not the lack of stars that’s surprising astronomers. The galaxy, nicknamed DF2, also seems to lack any significant amount of dark matter.

Because DF2 would be the very first known galaxy without the mysterious substance, the news of its discovery in 2018 quickly spread throughout the astronomical community. If confirmed, a galaxy without dark matter would throw a wrench into our understanding of how galaxies form and evolve. Every galaxy we know of so far has a sizeable chunk of the invisible matter, so finding one without it would mean one of two things: Either DF2 never had any dark matter to begin with, or it somehow managed to shed its dark matter during the course of its life.

But extraordinary claims require extraordinary evidence. And according to at least one group of researchers, the evidence for DF2’s dark-matter deficiency doesn’t hold up.

To determine how quickly the globular clusters were rotating around DF2, the researchers analyzed the absorption lines of spectra taken with the Keck Observatory. This allowed them to determine each cluster’s velocity, which they then used to calculate the overall mass of the galaxy. (Credit: Gemini Observatory/NSF/AURA/W.M. Keck Observatory/Jen Miller/Joy Pollard)

DF2 is a member of a unique class of galaxies called ultra-diffuse galaxies (UDGs). Although UDGs can grow as large as the Milky Way — some 100,000 light-years across — these hazy specters contain hundreds to thousands of times fewer stars than our own galaxy. This makes them essentially see-through, which means they’re difficult for astronomers to observe in detail.

To probe the properties of DF2, researchers led by Pieter van Dokkum of Yale University identified 10 globular clusters (large, spherical groups of old stars) within DF2 and measured how quickly they appear to orbit around it. To their surprise, they discovered the globular clusters are moving at a snail’s pace compared to what we see in other galaxies that are chock-full of dark matter. This led them to conclude that DF2 contains, at most, a miniscule amount of dark matter. After all, if it had more, the clusters would be moving much faster.

But not everyone agrees with van Dokkum’s conclusion.

“Something that caught my attention very early on was the fact that the galaxy was not only anomalous for not having dark matter, but also for having an extraordinarily bright population of globular clusters,” says Ignacio Trujillo of the Instituto de Astrofisca de Canarias, who led the main study rebuking the distance to DF2. “I remember thinking: ‘Two anomalies at the same time really looks odd.'” This led Trujillo to consider whether DF2 is really as distant as van Dokkum’s team thinks.

If DF2 were some 64 million light-years away, like van Dokkum suspects, then the galaxy would be a strong candidate for the first example of a galaxy without dark matter. But Trujillo says that if DF2 is closer, the galaxy’s observed properties would more or less fall in line with what’s expected from your run-of-the-mill, dark-matter-dominated galaxy.

To test their theory, Trujillo and his team set off to determine their own distance estimates to DF2 using five different methods — all with varying degrees of trustworthiness.

Two of the methods relied on analyzing the brightnesses and sizes of DF2’s globular clusters. According to the short-distance camp, if DF2 is a bit closer than initially thought, then the galaxy’s globular clusters would no longer be weirdly big and bright. They also compared DF2’s properties to a similar galaxy, called DD044, which has a more reliable distance estimate, as well as recalculated DF2’s distance using the same method as the original team.

Finally, Trujillo’s team analyzed the Tip of the Red Giant Branch (TRGB) in DF2’s color-magnitude diagram (CMD), which plots the temperatures and luminosities of stars within a galaxy. Because the brightest red giant stars all shine with the same true brightness when observed in infrared, the only thing that should greatly impact how bright they appear to us is their distance.

“This is by far the most accurate way of measuring the distance to the galaxy if the data have good quality,” Trujillo says.Based on all five methods, Trujillo and his team estimate DF2 is probably only about 42 million light-years away, rather than the original estimate of 64 million light-years.

But van Dokkum isn’t convinced by this competing distance determination.

Last year, his team published yet another paper in response. Their result: DF2 is about 61 million light-years away, which would mean DF2 still has a negligible amount of dark matter.

But the debate didn’t stop there.

After this academic back-and-forth, van Dokkum and his team uncovered yet another galaxy, DF4, that also seems to be lacking dark matter. By measuring how DF4’s light is distributed across the galaxy, van Dokkum determined DF4’s distance is similar to DF2’s — about 65 million light-years.

But Trujillo and his team have since published their own analysis of DF4’s distance using the TRGB method. In it, they conclude DF4 is just 44 million light-years away, which would make DF4’s globular clusters more similar to those found in the Milky Way. “All in all,” they conclude in the paper, “the proposition that both [DF2] and [DF4] are ‘missing dark matter’ is still far from being placed on sure footing.”

Although the answer to whether the galaxies have dark matter or not is still up in the air, the discourse between the two teams serves as real-world glimpse of the scientific process in action.

“The broader point is that these are fascinating galaxies, and all aspects of our findings should certainly be questioned and scrutinized,” van Dokkum says.

And there may be a definitive answer on the horizon.

Recently, van Dukkum’s team secured a chunk of observing time with the Hubble Space Telescope. They expect the new observations to help them pin down DF4’s distance to within about 5 percent. So for now, both van Dokkum’s and Trujillo’s teams are simply waiting to dive deep into the new data.

And when they do, we may finally learn whether galaxies without dark matter can actually exist, or whether some galaxies just happen to be very good at hiding the already stealthy substance.