The holiday season is upon us once again, but humans have been overindulging in the name of the gods, the new harvest and the New Year for millennia. 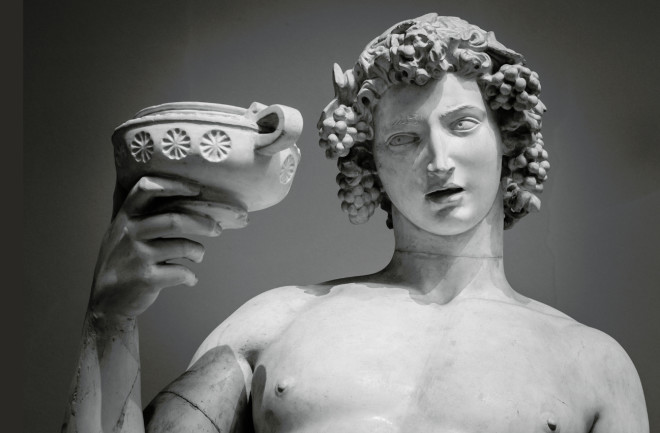 In our family, Halloween marks the beginning of the holiday season. By November, the ghosts and goblins have taken a back seat to turkey and stuffing — and then dreidels and Santa Claus come December. It’s a lineup of holidays that carries us into the New Year.

But modern humans aren’t the only ones who have been known to gather in the name of the holiday season. In fact, we’ve toasted to the gods, the New Year and the new harvest since the birth of civilization. Ancient Egyptian, Roman, Mayan and Greek societies also celebrated holidays and partied plenty. Here are a few of the most notable.

The ancient Romans celebrated the festival Saturnalia in honor of Saturn, the god of sowing or seeding. The holiday was celebrated on or around December 17 each year, at the end of the planting season. Similar to the way our own holiday season seems to be begin earlier and earlier each year, the philosopher Seneca noted in a letter from the first century that the Romans were known to stretch Saturnalia far beyond its dedicated day, says Kendra Eshleman, an associate professor of classical studies at Boston College. By the Late Republic (133-31 B.C.), Saturnalia had been extended to a week-long festival of libation.

Eshleman says the holiday included both public and private components; an animal sacrifice to the god Saturn occurred publicly, then a private celebration at home included parlor games like dice as well as drinking wine, dressing up and feasting.

The holiday was also marked as a day for shaking up social norms. The Romans replaced their formal white togas with colorful tunics, and slaves dined with and were even served by their masters — rather than the other way around. "During Saturnalia, social hierarchies would be upended,” Eshleman says.

This is largely because, according to ancient Roman texts, the “Time of Saturn” was considered a time of egalitarianism with no private property, no work and plenty of wealth to go around. This left no need for slaves and the work they did without pay. Everyone was allowed to wear a pileus hat, typically given to Roman slaves once they received their freedom, during Saturnalia because everyone was equal.

Ancient Mayans living during the Classic Period (A.D. 250-1000) had two elaborate calendar systems: one that was 365 days and another that was 260. Even the 365-day calendar didn’t celebrate the leap year, however, so the exact dates of Kʼatun are difficult to calculate, says Takeshi Inomata, an archaeologist who studies Mayan civilization at the University of Arizona. Still, we know that Kʼatun was the largest holiday in the Mayan calendar and was celebrated at the end of the year as well as part of a particularly huge festival every two decades.

Read More: How the Maya Created Their Extraordinarily Accurate Calendar Thousands of Years Ago

Inomata says that turkey, maize, cocoa, honey and a mead-like fermented beverage were an important part of the celebration. In large cities like Tikal, located deep in the rainforests of northern Guatemala, communities numbering as many as 60,000 came together for an appearance from a king who donned an intricate head dress with jade ornamentation.

“Jade was symbolic to the Mayan people and therefore an important part of the celebration,” Inomata says. The stone was thought in this ancient civilization to have important spiritual and religious significance.

In Ancient Egypt’s Old Kingdom (around 2787-2191 B.C.), Wepet-Renpet or the “opening of the year” took place annually in accordance with the yearly flooding of the Nile River. Daily life in Ancient Egypt was closely tied to the Nile. Each year, seasonal monsoons in the Ethiopian Highlands — the mountains of Northeast Africa — flooded Egypt’s main river and left behind a layer of rich silt that fertilized Egyptian farmlands.

This celebration of the new year, which occurred around mid-July, was an enormous affair that, according to Egyptologist Melinda Hartwig, likely included incense, candles, visits to the temple and a royal appearance from the pharaoh. Celebrations featured an evening meal of bread, grapes, pomegranates, dates, melon, beef, fish and ample beer, while the wealthier elites sipped on wine.

But this was also a time to take stock, literally. Government officials, Hartwig says, traveled to individual farms to calculate the year’s taxation based on coming crop yields and cattle counts.

Known as Athens’ Festival of New Wine, Anthesteria was held in honor of the wine god Dionysus and celebrated the coming of the new harvest. The year’s wine harvest was thought to be of equal importance to its wheat harvest because wine was such a dietary staple to the ancient Greeks. The famous festival took place over the course of three days in February or March and was marked by the opening of the newly harvested wine jugs.

The mood on the third day of the festival, however, became more somber. According to Greek scholar Noel Robertson, “Dionysus, the god who brings new life and ecstasy, also rules over the realm of the dead and the fate of the soul.” On the third day, pots of seeds and wheat were offered to the dead — who by some accounts were thought to walk amongst the living during this day of celebration.

Although many details of Anthesteria are unfortunately lost or unknown to scholars today, the festival is largely thought to have been a drunken blur of wine consumption. And if there’s one thing that humans from throughout history have in common, it’s a love of celebration. These ancient festivals were raucous affairs boasting ample booze and a good reason to get together with family and friends and enjoy the fruits of the year’s harvests.

This year, don’t feel too guilty come New Year’s Day if your waist feels wide and your liver pickled. After all, we’ve been overindulging in the name of ritual for millennia.