After a Flawless Launch, Kepler Telescope Gets Ready for Planet Hunting 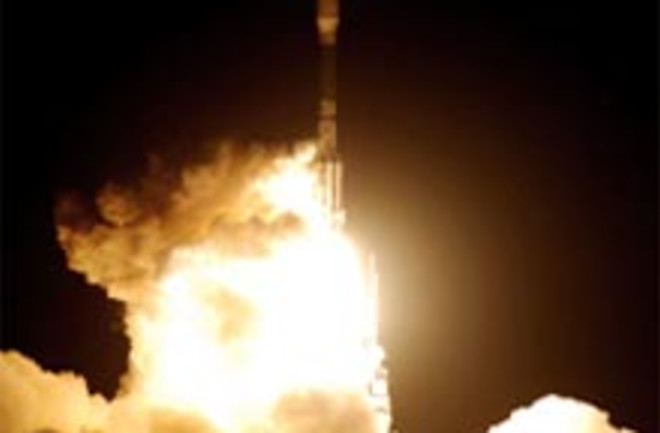 On Friday night, a Delta 2 rocket blasted off from the Kennedy Space Center and roared into space carrying a satellite that will search the heavens for Earth-like planets.

The craft, Kepler, named after the German astronomer Johannes Kepler, who discovered the planetary laws of motion, is to spend the next three and a half years in an orbit around the Sun, where it will count planets by looking for the tiny blips in starlight caused by planets eclipsing their suns [The New York Times].

The $600 million satellite will stare into a region of the Milky Way that's thick with stars, in the direction of the constellations Cygnus and Lyra. While Kepler is expected to identify many new planets beyond our solar system, known as exoplanets, the real prize would be to find rocky planets in the "habitable zone" around a star, where conditions might be right for life as we know it.

"The habitable zone is where we think water will be," Bill Borucki, Kepler principal investigator at NASA Ames, says in a video on the space agency's Kepler site. "If you can find liquid water on the surface we think we may very well find life there. So that zone is not too close to the star, because it's too hot and water boils, and not too far away where the water is condensed...a planet covered with glaciers. It's the Goldilocks zone--not too hot, not too cold, just right for life" [CNET].

While more than 300 exoplanets have been found since 1995, so

far none of them qualify as prime real estate for life, and few of them reside in systems that resemble our own solar system. Many of the first planets discovered were so-called hot Jupiters, gas giants zipping around their stars in a few days in tight, blisteringly hot orbits [The New York Times].

Most of these giants were found by the so-called wobble method, in which the planet's gravitational tug makes its star appear to wobble ever so slightly; a planet that is close to its star has a stronger tug and is easier to detect. However, Kepler will bring new technological sophistication to the task of planet hunting. It uses the transit method, in which it watches for the slight darkening of a star as a planet passes in front of it, and researchers say it will be able to detect smaller planets in more habitable orbits.

Every half hour, Kepler will record the brightness of 100,000 stars using a 95 megapixel camera.... The camera is so sensitive, it could spot the imperceptible dimming of a car headlight as a fly wanders across it [The Guardian].

Related Content: DISCOVER: How Long Until We Find a Second Earth? 80beats: New Telescope Could Reveal a Milky Way Packed With Habitable Planets 80beats: Small, Rocky Exoplanet Is the Most Earth-Like World Ever Seen 80beats: Dust Around Dead Stars Suggest Rocky Planets May Be Commonplace 80beats: Hubble Reports First Ever Signs of Carbon Dioxide on an Exoplanet