Researchers are still piecing together how this dwarf dinosaur found its way from France to Romania. 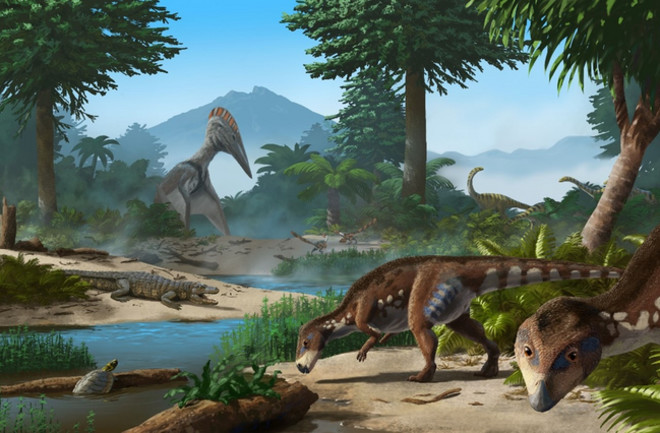 (Credit:Peter Nickolaus) Inhabitants of the "Island of the Dwarf Dinosaurs" in present-day Transylvania in the Cretaceous: Transylvanosaurus (front right), as well as turtles, crocodiles, giant pterosaurs and other dwarf dinosaurs.

An international team of researchers recently identified a new species of dwarf dinosaur. According to a press release, the team first found the bones in 2007 in a riverbed of the Haţeg Basin in Transylvania — a hot spot for Late Cretaceous vertebrate discoveries in Europe.

The dinosaur, an herbivore in the Rhabdodontidae family, lived nearly 70 million years ago and had an extremely flat head. Because of this, researchers have named it Transylvanosaurus platycephalus or 'flat-headed reptile from Transylvania.' However, while the name describes this newly discovered dinosaur perfectly, researchers are puzzled as to how it got to the "Island of the Dwarves" in Transylvania to begin with. According to a press release, T. platycephalus' closest relatives lived in what is now France.

"They had powerful legs and a powerful tail. Most species, in particular reptiles, can swim from birth," says Felix Augustin, a paleontologist from the University of Tübingen in a press release. While these are all possibilities, the team is still looking for a more definitive answer.

It's also possible that these creatures could have evolved in parallel, despite being from Eastern or Western Europe.

According to the press release, in Europe, most of the Cretaceous period (145 to 66 million years ago) was a tropical archipelago. T. platycephalus lived on one of the many islands with turtles, crocodiles, giant flying pterosaurs and other dwarf dinosaurs.

"With each newly-discovered species, we are disproving the widespread assumption that the Late Cretaceous fauna had a low diversity in Europe," says Augustin in a press release.

So far, researchers have discovered ten dinosaur species in the area. Only a few skull bones of T. platycephalus were found, but it was more than enough to help piece together its size and shape.

"That is unusual. When we do find something, there are often only a few bones; nevertheless, even these can sometimes yield amazing news — such as with Transylvanosaurus now," says Zoltán Csiki-Sava, a paleontologist from the University of Bucharest in a press release.

The bones were luckily buried in the sediment of a river bed, protected from serious decay.

"If the dinosaur had died and simply lain on the ground instead of being partly buried, weather and scavengers would soon have destroyed all of its bones, and we would never have learned about it," explains Augustin in a press release.