A New Angle on Light Control

A tiny block reflects rays like a mirror except at one angle. 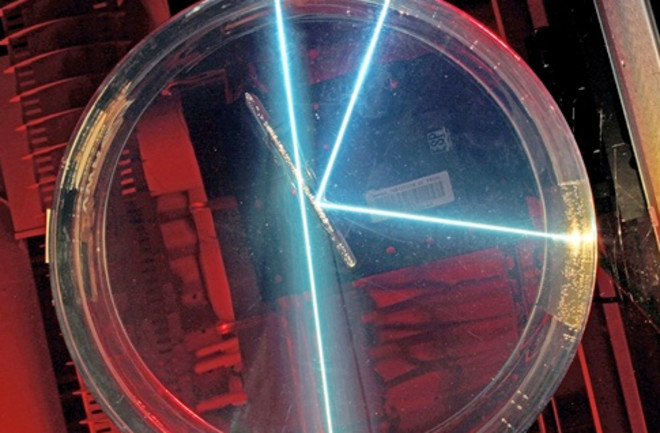 The small block appears transparent to light approaching at 55 degrees from vertical, but reflects all other angles. | Weishun Xu and Yuhao Zhang/MIT

Humans know how to filter light: Stained glass only allows through light of a certain color, and polarized sunglasses block certain light waves.But filtering light based on the direction it’s traveling has eluded scientists for decades.

But now, scientists at MIT devised a tiny block that can do just that. It’s smaller than a stick of gum and made of 84 thin, alternating layers of glass and tantalum oxide (a compound often found in electronics).

Viewed from most angles, the block reflects light like a mirror. At exactly 55 degrees from vertical (35 degrees from the block itself), however, it appears transparent, totally clear.

That’s because each of the 83 interfaces between the two materials filters some of the incoming light; only the light traveling at the correct angle makes it through the block (rendering it transparent). The rest bounces back as a reflection.

The March discovery could make computer screens more secure and help astronomers better filter light from stars and planets. Yichen Shen, a Ph.D. student who worked on the project, calls it “an essential step in achieving control over light.”