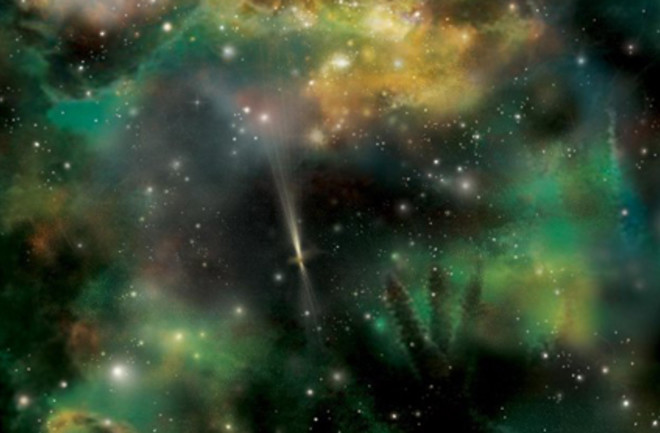 New results are in from the Fermi Space Telescope, which settled into orbit in the summer of 2008, and the findings seem to prove Albert Einstein right once again. Man, that guy was good. The telescope detected and studied a gamma ray burst, one of the massively bright and powerful explosions that occurs when stars go supernova in distant galaxies. Astronomers were interested in the gamma rays of differing energies and wavelengths that were generated by the explosion, and that raced each other across the universe.

After a journey of 7.3 billion light-years, they all arrived within nine-tenths of a second of one another in a detector on NASA’s Fermi Gamma-Ray Space Telescope, at 8:22 p.m., Eastern time, on May 9 [The New York Times].

The researchers were wondering if certain gamma rays with both high energies and short wavelengths would arrive last, at the back of the pack. That would suggest that they had violated one of the principles set out in Einstein's theory of relativity: that the speed of light is always constant. If researchers could detect a significant lag in some gamma rays, it would also give fresh hope to those ambitious researchers searching for a theory of everything.

At present, two separate theories dominate the world of physics. General relativity explains gravity and the motion of large objects such as planets, stars and galaxies, whereas quantum-mechanics explains the behaviour of very small things such as atoms. Both theories do well at explaining their respective worlds, but they don't fit together mathematically. The problem is as fundamental as it gets: the two see space and time very differently [Nature News].

Einstein's general relativity relies on space-time being smooth and continuous, while quantum mechanics suggests that the universe is made up of countless tiny grains of space-time. If the latter model is true, researchers theorized that the lumpy nature of space-time could interfere with the travel of some gamma rays.

In simplified terms, that’s because higher energy photons have shorter wavelengths, which makes them more likely to bump into tiny lumps in spacetime and to be slowed by those structures. The slowdown would be tiny, but the lower velocity of high-energy photons could in principle be detectable over a journey of several billion light-years [Science News].

But the study of the Fermi Telescope's results, published in Nature, declares that since all the gamma rays arrived within nine-tenths of a second apart, they must have all traveled at almost exactly the same speed. That suggests either that space-time is smooth and continuous, as general relativity proposed, or that the grains of space-time are smaller than we ever thought possible, and are having only the most minuscule effect on light waves. Researchers say the grains could theoretically

be smaller than one-hundred-thousandth of a trillionth of the size of a proton [Science News].

“I take it as a confirmation that Einstein is still right” [The New York Times].