With great ambivalence we note the passing of  the first and only reusable spaceship, the space shuttle,  on July 21, 2011. Our prayers are with NASA. 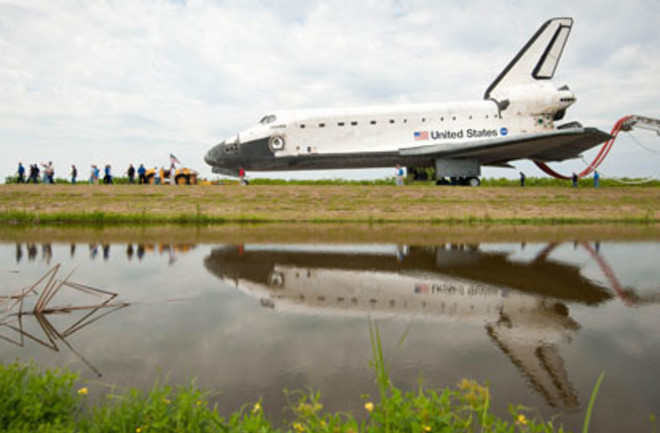 The space shuttle, which long served NASA and humankind as a low-Earth-orbit 18-wheeler, died on July 21 at the NASA Kennedy Space Center in Florida, after gliding to an uneventful touchdown from a routine mission. It was 39 years old. The shuttle program had been suffering for several years from a wasting loss of enthusiasm for its high price tag and untamed risks. The final cause of death was failure to find any reason to keep pouring billions of dollars into an obsolete space ferry that lacked a stirring mission.

Initially embodying the dream that space travel might become routine and that we could establish an orbital beachhead for ambitious exploration of the moon and beyond, the shuttle ultimately symbolized the cruel reality of space travel—one in which merely ferrying people and cargo to space’s jumping-off point is staggeringly difficult, expensive, and dangerous. Along the way the shuttle suffered two spectacular accidents that were seared into the nation’s consciousness, while burning through about $200 billion. But it also made possible the building and continuous operation of at least a small and creaky space station; the launching and in-orbit repair of hundreds of satellites, telescopes, detectors, and space probes; and the conducting of a slew of space-based experiments that contributed immensely to a range of fields.

“The end of the shuttle program is a sad day for science,” said Mark Hersam, a materials scientist at Northwestern University who designed technology experiments that flew on the shuttle. “Research that takes place in space will be severely limited for a while to come.”

Ordered up by President Richard Nixon in 1972 as successor to the extraordinarily successful Apollo missions to the moon, the reusable space shuttle was expected to fly nearly once a week at a fraction of the cost of past rockets plus space capsules. With a truck-size cargo bay, robotic arm, and—by Apollo standards—palatial crew quarters, the shuttle would be able to carry large satellites for release into orbit, haul up and piece together space-station components, and provide a temporary orbital home for scientists and engineers. It did all this and more, most notably including repeated repairs of the Hubble Space Telescope and the rescue of an errant communications satellite, which was subsequently relaunched from Cape Canaveral.

But since its first flight in 1981, the cost of shuttle missions often surpassed a billion dollars apiece, and that price tag, along with the unexpected difficulty of fully preparing a returned shuttle for its next launch, meant that the shuttle fleet flew an average of less than five times a year. Those problems paled, however, beside the shadow cast over the program by the loss of 14 astronauts in two catastrophic incidents. Challenger exploded on January 28, 1986, shortly after launch due to a leaky seal in the right rocket booster. Tragedy struck Columbia on February 1, 2003, during a fiery reentry caused by a breach in the craft’s heat-resistant thermal panels. Those accidents forever saddled the shuttle with the perception that it was fragile and poorly designed.

The outgoing three-shuttle fleet (Atlantis, Discovery, and Endeavour) is survived by several thousand laid-off scientists, engineers, mechanics, and other personnel who were responsible for the program’s operation, as well as by a President George W. Bush–endorsed scheme to re-create the rocket-and-capsule-style vehicles of NASA’s glory days with versions of shuttle hardware capable of reaching Mars. That plan was quickly jettisoned by the Obama administration but partially revived and currently kept on life support by Congress.

A claim to inheritance of the shuttle’s estate has been filed by SpaceX, Blue Origin, Virgin Galactic, and other private ventures hoping to prove that NASA has made space travel seem a lot harder and more costly than it needs to be.