Researchers are interpreting more artifacts as manifestations of play among ancient children. These are five of their most fascinating finds. 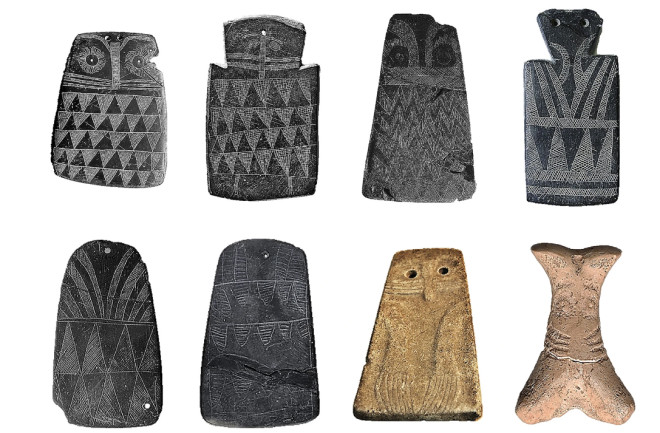 When archaeologists first found that thousands of owl-shaped slate tablets were interred in archaeological sites throughout the Iberian Peninsula, they were stumped. Struggling to pinpoint any practical purpose or function for the artifacts — which were over 5,000 years old and decorated with an assortment of detailed designs — they settled on the theory that the tablets possessed some sort of ritual or symbolic significance.

Now, a new paper published in Scientific Reports in Dec. 2022 suggests that children actually carved and used these tablets as a part of their play and development. The designs on the tablets also improved in their detail and delicacy as the children's carving abilities advanced.

“Children’s object play, and the objects themselves, [have] been disregarded in the archaeological literature until recently,” the authors assert in their paper. “Therefore, owl-like objects made in stone provide perhaps one of the few glimpses [of] childhood behavior in the archaeological record of ancient Europe.”

Though this shift in interpretations may sound surprising, it’s a familiar story in the field of archaeology. Up until recently, researchers regularly assumed that the strangest, most mystifying ancient artifacts were always associated with rituals. But archaeologists are starting to stray from that assumption, weighing a wider assortment of theories for the items that they find, including the theory that some odd objects are the playthings of ancient children.

Read more: The Ancient History of Board Games

In fact, though children have always amused themselves, researchers are only starting to put together a picture of the toys of antiquity. With that in mind, these five intriguing items captivated the minds and attentions of ancient children many millennia ago.

According to archaeologists, one of the world’s first toys originated in the caves of Ice Age France around 11,000 to 18,000 years ago. Fashioned out of flat slabs of stone or ivory, these circular artifacts, also called rondelles, featured several carvings of animals and abstract shapes across their surfaces.

Today, archaeologists think that the carved images were meant to meld together when the artifacts were spun, producing simple animations of the movements of deer, mammoths and other animals across the ancient terrain.

Previously seen as the paraphernalia of ritual rather than play, specialists think that ancient youths amused themselves with miniature versions of the tools that they'd manipulate or the animals that they would meet as adults. Identified in an assortment of regional and chronological contexts and crafted from an array of raw materials, figurines of animals were particularly popular.

While crude clay creatures could've captivated children at several sites in Israel approximately 8,000 years ago, sophisticated figures featuring functional wheels appeared around the same time in ancient Ukraine. Adding to the amusements around the world were the 6,000- to 4,000-year-old wooden figures, fashioned from torn-apart twigs, that appeared in archaic sties throughout the southwestern U.S.

A simple and adaptable toy, marbles were already a staple of play for the world's first cities and civilizations. While the oldest objects accepted as marbles were discovered at a site associated with the Indus Valley Civilization and trace back to about 5,000 years ago, marbles were also interred in the tombs of ancient Egypt and the ruins of ancient Greece and Rome.

According to archaeologists, the first marbles were fashioned from fruit pits and small pieces of smoothed stone, though some ancient artisans also turned to clay to craft the small, spherical playthings.

Made from a mixture of widely available materials such as wood, wax, stone, clay and ivory, dolls accompanied children throughout the ancient world. Simple stone dolls, decorated with crude carvings, appeared in the archaeological record around 4,000 years ago on the Mediterranean island of Pantelleria, while dolls with movable appendages and changeable clothing appeared around 2,000 years afterwards.

Particularly prominent in Greece and Rome, these dolls served a similar function to the dolls of today, providing players with an opportunity to use their imagination and to practice their social skills.

Appearing independently all around the world, spinning tops were yet another popular plaything throughout antiquity. Twirling through the cities of Iraq and Turkey by around 3500 B.C. and 3000 B.C., these toys also appeared in China, Greece and Rome and spun through the tales of the Iliad and the Aeneid.

So popular were these tops that the tomb Tutankhamun was sealed with a wooden spinner inside, well over 3,000 years ago in Egypt's Valley of the Kings.