Children have always played. But evidence of their pretend worlds and games is hidden in the archeological record. 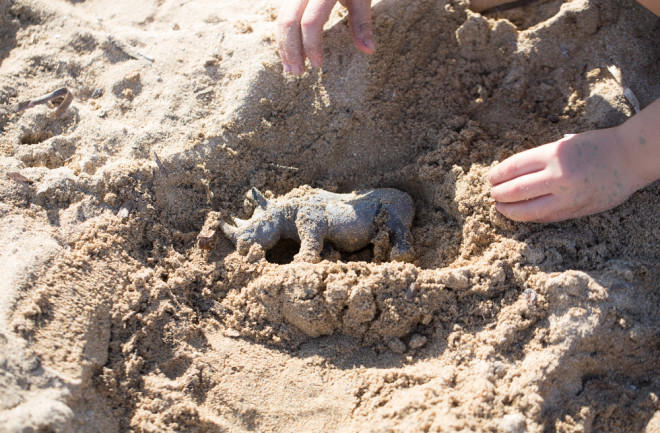 You come across a rock overhang and decide to rest. But in that secluded nook sits a crudely carved wooden figurine, with a lion’s head and human torso, surrounded by a ring of smooth, gray pebbles.

What have you stumbled upon? The leftovers of some occult ceremony ... or just a place where children play?

The scenario mirrors a real-life conundrum archaeologists face when examining ancient remains: how to distinguish adult rituals from children’s play.

In the past and today, the behaviors leave similar material traces. They often involve miniatures, like effigies or dolls, carefully arranged — perhaps on an altar or make-believe tea party table. Both create unusual patterns of debris, distinct from everyday acts like tool making and food preparation. And rituals and play generally occur in peripheral spaces, away from the hubbub of daily life.

When confronting enigmatic finds, researchers traditionally assumed ritual was the cause, and did not consider kids’ play. There’s even a joke among archaeologists: If you can’t explain some discovery, like a painted bear skull or a pile of colorful stones, say “It’s ritual.”

But over the past few decades, scholars have taken more interest in ancient children and developed methods to identify their marks — traces left from kids’ labor, learning and play. Thanks to this research, we now have some sense of the toys and games that amused children of the past.

In a 2018 Current Anthropology paper, Australia-based archaeologists Michelle Langley and Mirani Litster outlined ways child’s play has likely been misinterpreted as adult ritual. Their argument was based on ethnographic observations of many recent hunter-gatherer children; kids in these communities lead lives more similar to past peoples than do kids in industrialized societies.

The review showed that youngsters worldwide tend to play with miniature versions of tools they’ll handle as adults in that culture, like hunting bows and fishing gear. They also favor figurines or dolls representing animals and people — again, often to act out situations kids could encounter as grownups.

Based on these observations, numerous archaeological cases of “ritual items” may well have been toys. For example, dozens of clay figurines, crudely pinched into four-legged creatures, were recovered from Near Eastern sites roughly 8,000 years old. Earlier researchers wrote the possibility these artifacts were children’s toys “cannot totally be ruled out.” But, they concluded, it’s most likely the animal-like figurines were used during magical ceremonies preceding hunts. Langley and Litster contend the toy hypothesis should not be dismissed.

Similarly, archaeologists unearthed animal figurines made from split twigs, scattered across roughly 2,000-year-old sites in the southwestern U.S. Originally thought to be for hunting rituals, the artifacts were later considered possible toys after three — resembling two deer and a duck — were discovered in a child burial from the period.

Probably the most convincing example concerns clay animal figurines and vessels from roughly 800-year-old Native American sites in present-day Arizona. In the 1990s, Grinnell College archaeologist Kathryn Kamp identified many child-sized fingerprints imprinted on the artifacts, proving kids at least made them.

How far back can we find toys?

The title of “oldest putative toys” goes to an artifact type found at sites in Western Europe dated to the Magdalenian period, 11,000 to 18,000 years ago, during the coldest phase of the last Ice Age. The enigmatic items, known as rondelles, are flat discs about 1 to 2 inches in diameter. Crafted from bone, stone or ivory, many rondelles bear a small hole and engraved image of animals or abstract shapes.

In a 2010 Antiquity study, researchers proposed the items worked like thaumatropes. These toys, popular in the 1800s, comprised wooden disks decorated on either side by images and affixed to strings. Pulling the cords rapidly spun the disk, causing the images to blur and appear animated, like a flip book.

The thaumatrope hypothesis was especially inspired by one lovely rondelle discovered in a French cave in 1868. One face shows a doe or goatlike creature standing profile; the flip side has the same animal with legs tucked. Researchers crafted a replica and spun it on a string made of tendon. The creature appeared to move — running with a springing gait, according to one interpretation, or falling dead, according to another.

Another compelling rondelle depicts a mammoth with eyes wide on one side, and the same creature apparently hunted on the other side: eyes closed, mouth slightly open, brow covered with V-shapes, perhaps representing spear points.

We don’t know if these Stone Age animations were for the young, though; they may have been enjoyed by adults, kids or people of all ages.

When it comes to ancient toys, the other major issue is that much of children’s play happens in their imaginations. Kids today — and in the past — amuse themselves with twigs, pebbles and thin air while playing house, war and other fantasy games.

Even young chimpanzees seem to play make-believe. Based on 14 years of observations of wild apes in Uganda, researchers reported juveniles treating sticks like baby dolls. The kid chimps carried and cradled bark, small logs and woody vines in the same manner that mother apes treated infants. Bouts of play-mothering lasted anywhere from one minute to four hours with a single stick, and were more common among female than male chimps. But the habit disappeared as chimps grew, according to the 2010 Current Biology report.

Considering chimps, our closest primate relatives, appear to play make-believe and kids universally do so today, it’s almost certain that ancient tots did. These behaviors rarely leave a trace, but in some rare cases researchers have found debris likely left from games of imagination.

For example, in the 2000s, archaeologists surveyed northwestern Greenland for campsites made by the ancestors of modern Inuit people — a past culture known as Thule, which inhabited the Arctic island beginning around A.D. 1200.

In addition to remnants of living quarters, the researchers discovered 92 features thought to be miniature playhouses. Generally, they comprise stone circles, arranged like the foundations of full-sized shelters, but smaller, about 2 to 6 feet across — appropriately sized for dolls or a few kids, respectively. Along the edges, where real homes stored blubber and meat, there were piles of white and red pebbles, likely imaginary substitutes for the food stocks. Most playhouses were situated about a football field’s distance from the main settlement area — away from adult attention, yet within shouting distance.

It seems even ancient kids wanted to escape their parents, but still hear the dinner call.