What did game night look like thousands of years ago? Before Monopoly and Candy Crush, ancient people were playing mehen and the Game of Twenty Squares. 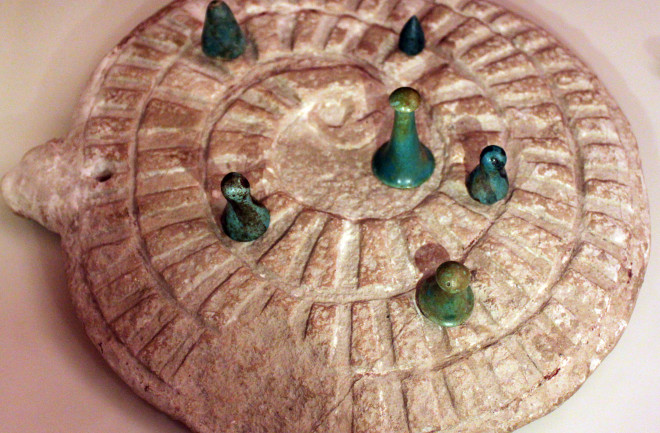 Coiled-serpent board from the ancient Egyptian game of mehen. (Credit: Anagoria/Wikimedia Commons)

When it comes to board games, people either project enthusiasm or antipathy. Some of us host game nights. Others fake illness to avoid such gatherings.

Wherever you stand, the fact remains: Board games have been popular pastimes in diverse cultures since the dawn of civilization. Archaeologists working around the globe have discovered remnants of these games, including boards, tokens and dice made from animal bones.

The finds reveal the great antiquity and cross-cultural ubiquity of board games. But researchers still have much to learn about past games’ rules, players and stakes.

Timeless or Lost to Time?

Certain games persisted and morphed over the millennia into ones we know today. The origins of chess, for instance, likely trace back to the Indian game of chaturanga, described in Sanskrit texts from the seventh century A.D. onward. The ancient version simulated a battle between the four arms of the Indian army: elephant, cavalry, chariots and foot soldiers. The game evolved as it spread through Persian, Arabic and European cultures; by the 16th century, it resembled modern chess — complete with the dominant queen, reflecting the powerful female monarchs of the time, like Elizabeth I of England and Catherine de Medici.

Other games fell out of fashion and their rules were forgotten. That’s the case with mehen, a game played in Egypt’s Old Kingdom between 4,000 and 5,000 years ago. Based on grave goods, texts and murals, archaeologists know mehen — which translates to “coiled one” — involved a circular board shaped like a coiled snake. Tail on the outside, head in the center, the serpent’s body was segmented by dozens of notches. Game sets also included marbles of six different colors and six lion figurines. It seems that up to six players raced pieces around the snake’s coiled body. But the spaces are too small for the marbles or lions, and artistic scenes depict the board standing vertically. Modern scholars can say that mehen was played, but not how.

The oldest artifacts considered to be game boards come from the Near East between 6,000 and 10,000 years ago, during the Neolithic Age — when people in the region began farming and residing in permanent settlements.

At Neolithic sites in present-day Jordan, Syria and Iran, archaeologists have discovered about a dozen stone or plaster slabs pecked with rows of shallow divots. Researchers suspect the slabs served as boards for mancala-like games. If so, players would have filled the depressions with game pieces and then competed to clear or capture their opponents’ pieces. While no obvious game pieces accompanied the slabs, players likely used seeds, pebbles or other ad hoc tokens.

Durable, crafted game pieces from this period remain elusive. Small clay spears, cones and other 3D shapes are common finds across Neolithic sites of the Near East; some scholars propose these pocket-sized artifacts were game pieces, but most think they were used for accounting — keeping track of quantities of goods — before the invention of writing. More convincing game “pawns” come from a Neolithic site in southeast Turkey, which yielded a cache of 22 polished limestone pieces, each about 1 inch tall and with a flat base.

That’s not to say people weren’t gaming earlier or elsewhere; the Near East boards and putative pawns just withstood the test of time because they were made of stone or plaster. Undoubtedly, other games were perishable — with pieces made of sticks and boards drawn in dirt — and vanished soon after play.

A little later, during the Bronze Age, the evidence for board games in the Near East becomes richer. In 2013, researchers excavating a 5,000-year-old grave in Turkey reported 49 small stones, sculpted and painted to resemble pigs, dogs and 3D shapes, along with dice and circular tokens made of shell. Archaeologists proposed the artifacts were game pieces, but they didn’t find any board or rulebook. Trying to comprehend this game is like discerning the rules of Monopoly from only the little silver dog, top hat and scattered bills and playing cards.

Researchers do, however, understand how to play a game that grew popular around 4,500 years ago. It’s known today as the Game of Twenty Squares, or the Royal Game of Ur, and more than 100 boards have been recovered from sites across the Eastern Mediterranean and Middle East.

Archaeologists unearthed the first examples during 1920s excavations of the royal cemetery at the Sumerian city of Ur, in present-day Iraq. Most ornate of this set, one board displayed shimmering floral and geometric motifs crafted from shell, lapis lazuli and red limestone.

Today, we understand Twenty Squares (or at least one version of it), thanks to an ancient rulebook inscribed in cuneiform script in second-century B.C. Babylon. The stone tablet was found in the ruins of Babylon in the late 19th century, but then sat forgotten in British Museum collections for nearly 100 years before curator and philologist Irving Finkel recognized its significance. Finkel’s translation describes a complex race and betting game. You can read or watch a full explanation, but briefly: Opposing players raced five pieces, representing birds of differing values (swallow, storm-bird, raven, rooster, eagle), across the board’s 20 squares. Moves were dictated by rolling four-sided dice made from anklebones of sheep and ox.

But the rules of Twenty Squares surely varied, given its geographic and temporal spread. The Babylonian inscription is just one community’s take on the game.

Lost Games of the Americas

Numerous games are known from the Aztec Empire and other past civilizations of Central America. Among them, patolli required some pebbles, a mat painted with squares in an X or cross, as well as several large beans, marked on one face by a dot or hole. Players tossed the beans; how they landed determined the throw’s score — the number of squares players could move their pebbles along the mat. Competitors and onlookers bet on the outcomes, often invoking Macuilxochitl, god of games, for luck. On feast days, people convened from far-flung territories and gambled with valuable exotic goods.

Despite its widespread popularity, little physical evidence remains of patolli. In the 16th century, Spanish conquistadors banned the game, destroyed mats and burned the beans as part of their efforts to destroy indigenous cultures. What contemporary scholars do know about patolli comes from passages in colonial-era manuscripts describing its play.

The situation is reversed for a much older pebble racing game: Researchers discovered traces of the game, but no written or pictorial records of the rules. In a 2013 Latin American Antiquity paper, archaeologist Barbara Voorhies described possible game boards from a roughly 5,000-year-old site in southern Mexico, near Chiapas.

Within a mangrove swamp, the island site appears to have been an intermittent fishing camp where ancient people caught and prepared aquatic resources. In addition to thousands of piled-up clamshells, excavations uncovered two potential boards. The better-preserved comprises 24 finger-sized holes, fairly evenly spaced in an oval, imprinted in the claylike floor. In the oval’s center was an impression where a rock probably sat. Although the rules are unknown, Voorhies points to similar-looking games played in later monumental cities like Teotihuacan and Copan, as well as by Native American groups described in ethnographic accounts in the early in the 19th and early 20th centuries. In these games, players raced pieces along the hole course based on dice rolls.

It seems that 5,000 years ago, the fishers at this camp played games as they waited for their clams to dry. Not so different from you whipping out your phone to play Candy Crush as you wait in the coffee line.