History may have overlooked these fierce female pirates, but they were a force to be reckoned with. 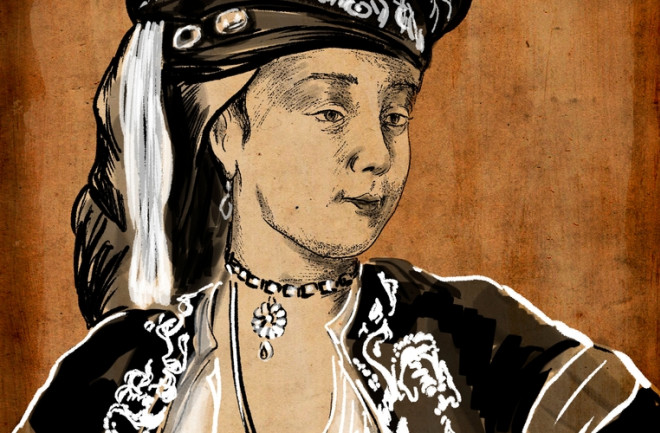 Pirates in our favorite books and films are often portrayed in the same character type and style. Captain Hook from Peter Pan, Jack Sparrow from The Pirates of the Caribbean and Long John Silver from Treasure Island — to name a few — wore long-sleeved, puffy white shirts topped with a jacket. They sported tricorn hats, gold earrings and wore daggers at their hips. One of the characters was usually missing an appendage such as a hand, a leg or an eye. And a parrot is usually involved somewhere in the story.

Literary scholars have long criticized “pirate chic” for making these bandits seem like a European phenomenon. Pirates were a global problem, and they terrorized waterways from the Caribbean to China. The aesthetic also ignored another key detail. Pirating wasn’t just for men. For centuries, female pirates also commanded ships or served on the crew.

Pirate of the Mediterranean: Sayyida al-Hurra

Sayyida al-Hurra — a title given to women in power — was born in the late 1400s around the time the Muslim Kingdom of Granada fell to the Spanish monarchy. Wealthy families, including Sayyida al-Hurra’s, fled to North Africa to escape oppression and forced conversion to Christianity.

In the early 1500s, in modern-day Morocco, she used her fleet to get revenge against the Spanish.

In North Africa, Sayyida al-Hurra married the leader of a city-state, Tétouan, which had been sacked decades earlier by the Castilians. The power couple worked to restore and re-inhabit the city.

Sayyida al-Hurra took full control when her husband died in 1515. Once the region was in her power, she reached out to a privateer to learn how to take revenge against her Spanish enemies. For the next 20 years, she ruled the western Mediterranean Sea as the commander of a terrifying fleet of pirates.

Under her command, the pirates plundered European ships. They also targeted villages, took prisoners and enslaved them. Scholars aren’t certain whether she ever sailed with her pirates, but they agree she was their undisputed leader.

Her pirating by proxy lasted until she agreed to marry the Sultan. She was soon deposed, possibly by one of the Sultan’s sons, and lost control of both her city and pirate armada — much to the relief of her enemies.

Pirates of the Caribbean: Anne Bonny and Mary Read

In 1720, Anne Bonny and Mary Read stood in a Jamaican courtroom. Both women were in their early twenties, pregnant and accused of serving “Calico Jack” Rackham, one of the most wanted pirates in the Caribbean.

Victims testified the women were vicious, and worse than the men when it came to looting. One captain recalled how the women helped seize 50 rolls of tobacco and nine bags of pimento from his ship. He was held hostage for two days, and he complained about how the women used coarse language.

In 1720, a bounty hunter captured Rackman and his crew. The bounty hunter told the court how the men seemed resigned to their fate, but the women wanted to keep fighting and resisted arrest.

The women seemed thick as thieves, but they had met only the year prior on Rackman’s ship. While Read pirated as a way to survive, Bonny was a thrill seeker. She was the daughter of a wealthy merchant in South Carolina who eloped to the Caribbean with a penniless sailor and then ditched him for Rackman.

Rackman and many of his pirate crew received swift death sentences. The court, however, gave the women a stay of execution until after they had their babies. Bonny was Rackman’s lover and pregnant with his child; Read was pregnant with another pirate’s baby.

Neither woman hung for her crimes. Read died in prison from a fever, and it is speculated that Bonny's wealthy father came to her rescue and brought her back to South Carolina in the early 1720s.

Pirate of the South China Sea: Cheng I Sao

Cheng I Sao is considered one of the most successful pirates in history, and her legend lives on. Her name, which roughly translates to “wife of Cheng I” doesn’t reflect the cunning woman who had everyone at her mercy.

Historians believe she was born around 1775 in Canton, and little is known about her life before marrying Cheng I in 1801. He was already a notorious pirate, and his new wife helped make his fleet even fiercer.

After her husband died in 1807, Cheng I Sao took command of the family pirating business. She expanded her armada to as many as 60,000 men divided into six fleets. The fleets had around 400 ships, and they were organized into a color-coded flag system.

No navy was successful in stopping Cheng I Sao, and her pirates ruthlessly plundered merchant ships and raided wealthy villages. She also set up “protection schemes” in which fishing boats in inter-coastal waters paid a fee to avoid harassment.

The Chinese government tried for years to take down this unsinkable pirate queen. Eventually, they realized they could never beat her, so they would have to buy her out. Cheng I Sao named her steep terms — amnesty for all her pirates; ability to keep their looted wealth; pensions; resettlement money and a job for her new husband. The government agreed in 1810.

Her second husband died in 1822, and historians don’t agree on what happened to Cheng I Sao. Some say she ran a lucrative gambling den. Others said she made money as the owner of a brothel. It’s also been suggested that she made her money smuggling opium. Either way, it seems she died a wealthy woman.