Many of the etchings resemble human beings, which researchers infer are depictions of underworld spirits. 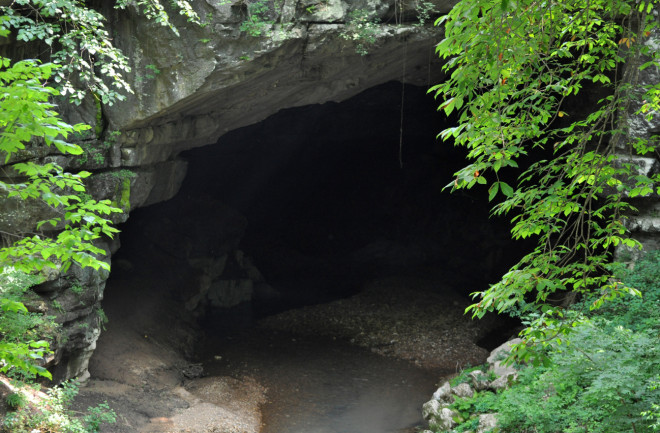 A feathered human. A serpent. A figure with swirling lines. The ancient cave art had been there all along — possibly 2,000 years. But no one noticed until a software program showed researchers what they had been missing.

A new study in the journal Antiquity details how a team of scientists used 3D photo mapping to recreate the tight crevices of an Alabamian cave and reveal previously unnoticed etchings. Unlike the petroglyphs seen in the Southwest’s canyon walls or rock formations, ancient rock art in the Southeast was often done deep inside caves because Native Americans viewed the sacred spaces as pathways to the underworld.

Now, the research team is calling on other scientists to use the same technology and discover what else lies hidden from sight.

Anthropology professor Jan Simek of the University of Tennessee and his colleagues focused on a cave they referred to as Alabama's “19th Unnamed Cave.” The cave is located on private property, but the exact location was not revealed in order to protect it from vandals or those of us who simply can’t resist seeing ancient art for ourselves.

A small stream flows out of the cave’s entrance, which is about 32 feet tall and 50 feet wide. Years of this flowing water explain the absence of any artifacts or etchings. Beyond the entrance is a large chamber — and further beyond, the cave winds into three miles of underground passageways.

The chamber where scientists first observed cave art, in the late 1990s, had an extremely low ceiling. Researchers crawled or crouched just to get through and the tightest spots were only two feet tall. The chamber also had no natural light, so flashlights were used to explore the space. It was here that researchers set up a camera and began taking pictures of what appeared to be a typical cave ceiling.

Read More: What the Oldest Known Cave Painting Reveals About Early Humans (and What It Doesn't)

The 3D photogrammetry used in the newest study was first introduced in 2017. The aim is to take photographs that overlap by 60 to 80 percent; then, a computer program blends these images and allows the user to manipulate the distance to add dimension.

In the past, the method has been used to document artifacts or provide virtual-reality experiences for temples and other sites around the world. “The potential of photogrammetry for discovery and analysis through the digital manipulation of spaces, however, has not yet been explored in archaeology,” wrote the study’s authors.

To study the 19th Unnamed Cave, the researchers spent two months taking 16,000 photographs. Their software allowed them to not only recreate the cave in three dimensions, but also to move the distance between the floor and the ceiling. When they lowered the cave floor, a wider view of the ceiling opened and the researchers were able to see hundreds of etchings that were not visible in person.

An unknown Native American artist used either their fingertip or an etching tool to create designs in the layer of mud that covered the cave ceiling. Many of the etchings were anthropomorphs, resembling human beings, which the researchers inferred were depictions of underworld spirits.

An anthropomorph in regalia, from the 19th Unnamed Cave. (Credit: photograph by Stephen Alvarez/illustration by Jan Simek)

One etching, for example, depicts a figure with both human and bird characteristics. The bottom is flared with tail feathers, but it also has a square, human-like head, shoulders and long arms. Its torso is covered in a design, which might once have been a piece of clothing or a type of regalia.

During their fieldwork, the researchers also collected several pieces of pottery shards from the cave floor. These helped them date the cave art to the middle- to late-Woodland period, which spanned from around 1000 B.C. to A.D. 1600. They were not, however, able to identify the anthropomorphs, which didn’t correspond to any recorded oral histories or previously documented archeological materials.

The scientists surmise that the size of the etchings mattered. The larger the depiction, perhaps, the more important the spirit was to the belief system. The size of the human-bird anthropomorph — larger than nearby etchings of insects, snakes and other figures — indicate it was more powerful or important than the others.

The authors concluded that 3D photogrammetry should be used in other cave explorations in order to fully map the walls, ceilings, and floors. “We believe that this technique can revolutionize the study of rock art,” they write. It could even reveal other things that modern humans have long overlooked.