Petroglyphs in the U.S.: What Native Communities Want You to Know About These Rock Carvings

Maybe you're setting out to see petroglyphs, or maybe you've come across them by accident. Either way, keep this information in mind. 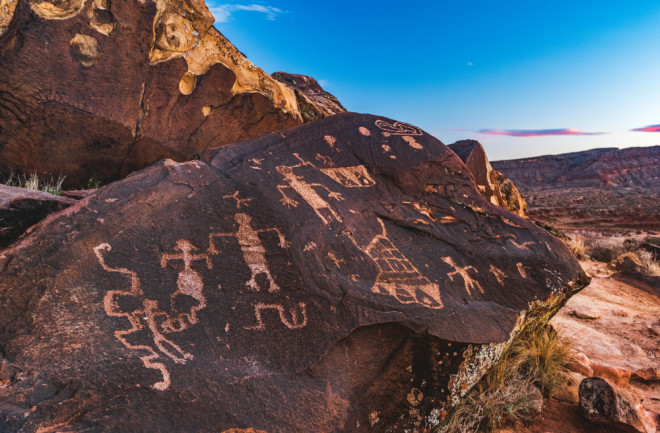 Even if you’re not looking for them, you might find them: rock carvings portraying abstract shapes or distinct figures. Petroglyphs, or imagery made by scraping away at the surface of rocks or other materials, exist across the U.S. as well as other parts of the world. Those in the U.S. belong to Native Americans and, of those tested by scientists, date back 10,000 to 15,000 years. Some communities still create these images.

Some petroglyphs can be found in parks and reserves meant to protect the imagery, like Petroglyph National Monument in New Mexico or Sanilac Petroglyphs Historic State Park in Michigan. Other petroglyphs can be found in surprisingly-accessible parts of cities. Tempe Butte next to the Sun Devil Football Stadium in Tempe, Arizona, has dozens of petroglyphs, and many lie next to a public walking trail, says Chris Loendorf, a senior project manager for the Gila River Indian Community in Arizona. “If people knew what they were looking for, they couldn't miss them,” he says.

When coming across petroglyphs, “a lot of people don't either understand what they're seeing, or, you know, they just don't notice it,” Loendorf adds. But if you find yourself face-to-face with petroglyphs you didn’t know you’d come across, here are a few things to keep in mind.

Even Ancient Petroglyphs Are in Use Today

Petroglyphs adorn rock surfaces from Saudi Arabia to Tasmania to Portugal, and often attract archaeologists hoping to learn more about what humans were doing and thinking when creating the images thousands of years ago. Although the people who created many petroglyphs are no longer alive, their ancestors still may interact with these images. Petroglyphs — no matter their age — are integral to the cultures of native communities across the U.S.

For the Saginaw Chippewa Indian Tribe, the term for petroglyph, ezhibiigaadek asin, literally translates to “written on stone,” says William Johnson, the curator for the Ziibiwing Center of Anishinabe Culture & Lifeways. “They offer teachings and instruction to the present-day Saginaw Chippewa Indian Tribe and Great Lakes Anishinabek including cultural protocols and traditional spirituality.” A large collection of rock carvings exists on the grounds of the Sanilac Petroglyphs Historic State Park, which in 2019, became the first Michigan state park to officially be co-managed by a tribal and state partnership.

“A misconception would be to assume that ezhibiigaadek asin holds no special meaning, [that they] were created without vision or conscious decision and don’t affect the lives of our families, clans and Nations,” Johnson says. “They help to perpetuate our cultures.” The tradition exists today, as some communities continue pecking into rock surfaces and creating petroglyphs, Loendorf says.

The past, current and future significance of petroglyphs means that some native communities are working to preserve what still exists. European colonizers removed Native Americans from their land and then developed and mined some of those same areas, ruining or erasing petroglyphs in the process. The destruction continues today, with reports of people spray-painting or carving into petroglyphs — and even using them as backdrops for target practice. Sanilac Petroglyphs Historic State Park dealt with vandalism as recently as 2017, Johnson says.

Conservators and communities have developed techniques for reversing some types of damage. A product called Elephant Snot dissolves most spray paints and works well on vertical surfaces, Loendorf says. He says that in recent years, teams removed graffiti on about 10 different petroglyph locations throughout the Gila River community using the solvent.

Maintenance strategies can help ward off the effects of time, too. For instance, microbes or bacteria can grow films over the rock surfaces, which not only can obscure what lies beneath but also degrade the rock. Gentle and careful cleaning can go a long way toward preserving petroglyphs.

Not all the damage people inflict on petroglyphs is reversible, however. When someone creates a petroglyph, the engraving removes a thin, dark layer of minerals and other materials that built up on the surface of the rock over centuries. Shooting bullets at petroglyphs doesn't just leave bullet holes — it also removes more of that irreplaceable dark patina that helps reveal the image. “When you're disturbing that, you're leaving a mark that's going to last for thousands of years,” Loendorf said.

It is both illegal and disrespectful to inflict any level of harm to a petroglyph — whether or not native communities can clean it up. And while the National Park Service has a guide on appropriate behavior when near petroglyphs, communities might have their own specific rules about what qualifies as a respectful interaction. The Ziibiwing Center, a Saginaw Chippewa Indian Tribe and Great Lakes Anishinabek cultural and educational facility, has guides on-site that let visitors know what is and isn’t appropriate, Johnson says. The center also offers programs that educate the public on the significance of petroglyphs and their preservation.