Will the Laptops of the Future Be a Pair of Eye Glasses? 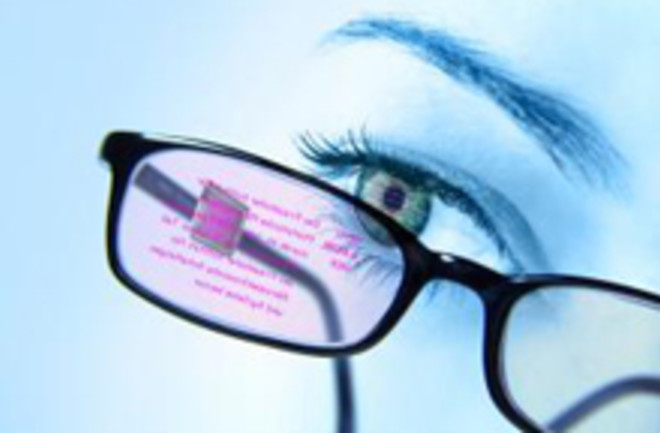 These days, some of us would rather experience the world through an augmented reality (AR)—one that is portable and hands-free, with devices that can enhance our perception of the world by changing the way we consume computer-generated information. If you watch football, you’ve likely seen AR technology used to draw an onscreen yellow line indicating a first down. And if you’ve been reading our Science Not Fiction blog, then you probably already know we humans are obsessed with the idea of becoming superhumans, stretching our imagination as far as we can. But most of what we see on TV has been inspired by what is really happening in labs around the world. The latest buzz is coming out of Germany, where researchers claim they’ve created glasses that can not only display data in front of your eyes, but also respond to questions presented by your eye movements. Researchers at Fraunhofer Institute for Photonic Microsystems in Dresden have created head-mounted display eyeglasses that use eye movements to control what is shown onscreen. The prototype contains a chip that can take data from an external PDA and project the information directly into the person’s retina, creating the illusion that the image is one meter away, when in fact it’s literally right in front of you. When the wearer focuses on part of the image, his/her eye movements alone can control what is seen next. Eye movements can change menus, switch pictures, or even look up additional text information (basically anything you'd want to do on your computer). The glasses also contain organic light-emitting diodes (OLEDs), which are used to clarify the object being viewed. While the possibilities seem endless—it can be used by surgeons, construction workers, mechanics, and basically anyone who needs their hands free during a task—the reality is still a ways away. People who have tested the HMDs available today complain they are "too expensive, too heavy, too bulky, and not very ergonomic." Related Content: DISCOVER: A GPS to Augment Your Entire Reality Discoblog: Human Cyborg Vision Science Not Fiction: Dollhouse Eyeball Cameras