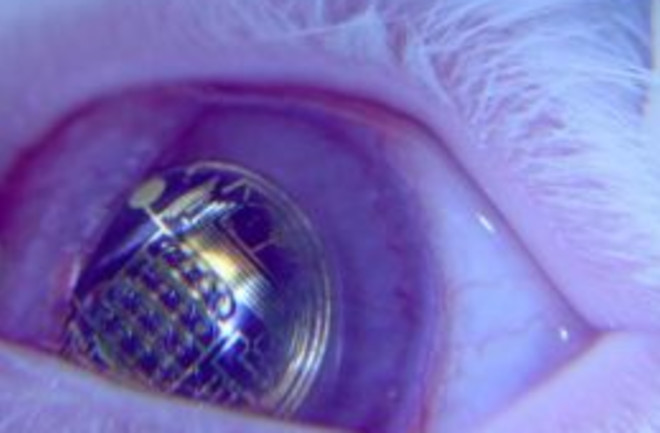 Bad at remembering names? What if all you had to do to remind yourself was center a crosshair on a person's face and his name-perhaps even his Facebook profile-would pop into your field of view? Engineers at the University of Washington have pushed our technologically primitive world closer to this Terminator-esque dream of augmented reality: They've manufactured contact lenses that contain electronic circuits and red LEDs-and taken pretty sweet pictures of rabbits showing them off. The circuits don't actually do anything yet-and don't seem like they will be doing anything anytime soon-but the contacts are a pretty impressive feat of engineering. In order to embed a metal electronic circuit in a flexible and safe contact lens (the rabbits wore the contacts for 20 minutes with "no adverse effects"), the researchers used layers of metal only a few nanometers thick and manufactured LEDs only a third of a millimeter across. They then sprinkled the system with tiny, self-assembling electrical components. The researchers hope that the system will soon be able to superimpose images-such as driving control panels and immersive virtual games-over the wearer's view of the outside world. The press release also claims that people could "surf the Internet on a midair virtual display screen that only they would be able to see"-although the idea of people crossing the street while their entire visual field is filled with porn is a little disconcerting. Beyond allowing people to take another step in making their Second Lives a reality, the lenses might someday offer tele/microscopic vision, the ability to see infrared frequencies, or perhaps the ability to take pictures and videos (because reality TV isn't destructive enough). And what if all those lucky fans at the Superbowl could actually see that yellow first-down line?