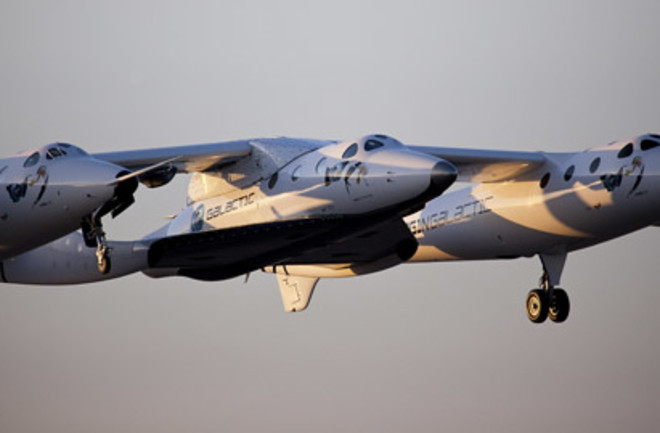 Virgin Galactic's newest spacecraft has taken to the skies in its first successful test flight. Billionaire founder Richard Branson unveiled and christened the VSS Enterprise (previously called SpaceShipTwo) in December, and yesterday it soared 45,000 feet for about three hours above the Mojave Desert in California. That altitude pales in comparison to Branson's goal. When Virgin Galactic is ready for a true flight, the Enterprise and its carrier vehicle will fly to even higher heights, where the Enterprise will separate and blast off on its own.

The craft will climb to about 60 miles above the Earth's surface. At that suborbital altitude, passengers will experience weightlessness and see the curvature of the Earth. The price for the experience: $200,000 [Los Angeles Times]

. Despite the steep price tag, more than 300 people have already signed up for their chance to reach space. CNN reports that 80,000 are on the waiting list, so even if you consider 200 grand a pittance, you might have to wait.

. Test flights continue through next year, and Branson wants to begin commercial operations in 2012.