"Twinkle, twinkle, little star" are words that make astronomers scowl. Twinkling happens because light headed earthward bends each time it passes through a layer of atmosphere with a different temperature than the one above. Just watch Sirius, the brightest star, as it flickers above the southwest horizon around midnight in early March (11 p.m. later in the month). It's pretty to look at but a nightmare for science: Dancing images look smeared through a telescope.

There are two solutions, and neither is easy. One is to place the instrument above the atmosphere, which is why there is a Hubble Space Telescope. The other is to use optical technology to unscramble the effects of turbulence. This approach has a huge advantage: It can coax sharper views from existing ground observatories.

Consumers can already buy video cameras or binoculars that automatically remove jiggles and shakes from the image. Using motion-resistant gyroscopes or a set of floating internal lenses, the binoculars produce views that remain steady even when the user is bouncing around in a moving car. Some camcorders employ electronics that manipulate the image itself to cancel out the jitters. The challenge to astronomers is much greater, however, because various parts of the image continually distort in different ways rather than shake in unison.

After years of development, an anti-twinkling technology known as adaptive optics is now going online at most of the world's major observatories. "The adaptive optics on the Keck now delivers images as clear as those from Hubble," says Bruce Macintosh, an infrared astronomer at Lawrence Livermore National Laboratory. When the device is switched on, images from the twin Keck telescopes, atop Mauna Kea in Hawaii, are 10 times sharper than before. 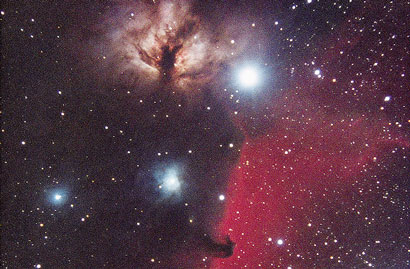 This adaptive optics system bounces the main image off a flexible secondary mirror. Tiny pistons, or actuators, push or pull parts of that mirror, rapidly deforming it like a pair of twistable eyeglasses to compensate for each moment's atmospheric turbulence. A sensor analyzes the incoming light and choreographs the frenzied movements of the 349 actuators, which adjust hundreds of times a second to keep all the parts of the image lined up.

In the latest development, researchers at Lick Observatory on Mount Hamilton in California are using a laser beam to excite a small patch of sodium atoms high in the atmosphere. This distant yellow glow functions as an artificial reference star, allowing adaptive optics sensors to gauge the precise atmospheric distortion over the observatory. The Lick prototype has yielded exceptional views of the centers of galaxies, and other observatories soon plan to have their own synthetic stars blazing in the heavens.

For the largest telescopes, adaptive optics systems work only at infrared wavelengths. Infrared rays suffer less from atmospheric distortion than does visible light, but giant mirrors intercept such a wide cross section of turbulent air that the actuators can barely keep up, even in the infrared. So adaptive optics cannot help where astronomers might want it most: clearing up visible-light images from the latest supertelescopes whose mirrors are more than 15 feet wide. Macintosh thinks it will be "at least several years" before the technology fix is in.

The military employs related kinds of image correction to sharpen the view down from space. In the 1980s, American KH-11 spy satellites had a resolution of less than one foot—enough to detect a person's head but not a bald spot. Newer satellites may be able to inflict such indignities. Meanwhile, researchers at Lawrence Livermore National Laboratory have created adaptive optics eyeglasses that can double the sharpness of normal vision to 20/10.

If these trends continue, within a few years earthbound observatories will outperform today's space telescopes. And people with visual problems may finally enjoy that quaint old astronomical annoyance, the twinkling of the stars.

The European Southern Observatory offers an introduction to adaptive optics and links to other projects dedicated to twinkle-free astronomy: www.eso.org/projects/aot/index.html.

Want to know what spy satellites can see? The Federation of American Scientists has some clues about what they can do: www.fas.org/spp/military/program/imint/index.html. 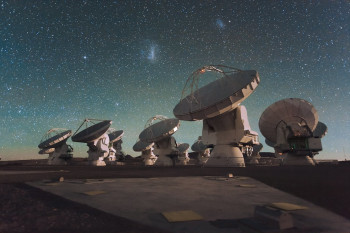