Researchers Want to Build a New World Out of Nanotech "Buckypaper" 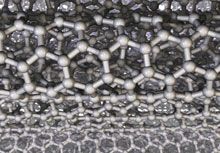 A thin nanotech paper that's being developed in a Florida lab could revolutionize everything from aviation to laptop computers, researchers say. The super-strong "buckypaper" could be layered like papier-mâché to build lighter airplanes and cars, or it could be exposed to an electric charge and used to illuminate computer and television screens--and those are just the most obvious applications, researchers say.

Buckypaper is 10 times lighter but potentially 500 times stronger than steel when sheets of it are stacked and pressed together to form a composite. Unlike conventional composite materials, though, it conducts electricity like copper or silicon and disperses heat like steel or brass. "All those things are what a lot of people in nanotechnology have been working toward as sort of Holy Grails," said [nanotech expert] Wade Adams [AP].

In 1985, a team of scientists at Rice University serendipitously discovered the origins of Buckypaper while conducting an experiment examining how stars produce carbon. An unexpected finding was a ball of 60 carbon atoms, which scientists named "Buckyballs" [Wired News]

, because of their resemblance to the geodesic domes built by Buckminster Fuller. Other researchers developed a tube-shaped variation, called carbon nanotubes, and discovered that the tubes would stick together to form a film, eventually named buckypaper. Researchers haven't yet created buckypaper materials that fulfill their full potential (500 times stronger than steel), but they say they expect to make a version this year that can compete with the strongest existing composite material.

The secret of its strength is the huge surface area of each nanotube, said [researcher] Ben Wang.... "If you take a gram of nanotubes, just one gram, and if you unfold every tube into a graphite sheet, you can cover about two-thirds of a football field," Wang said [AP].