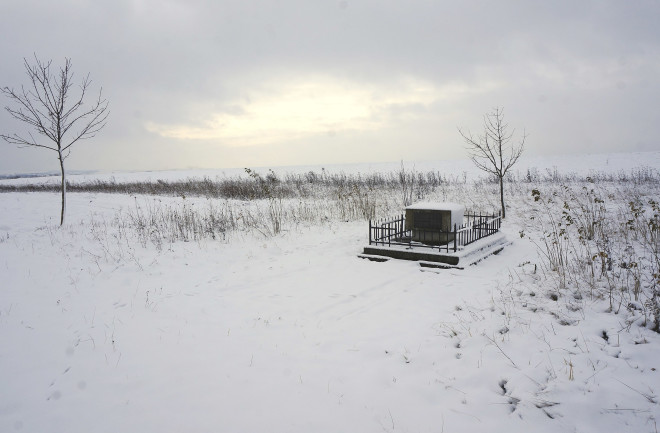 A memorial to Jewish Holocaust victims at a mass grave site in the Ukranian city of Rohatyn, where more than 3,000 people were killed in 1942. (Credit: TarichaRivularis/Wikimedia Commons)

The virtual tour of the Auschwitz death camp begins at the main gate. Visitors click white arrows and arrive at the unloading platform where Nazi physicians once determined which new arrivals were fit for work, and which would be sent to the gas chambers.

The ruins of the gas chambers — where about 900,000 Jewish people and other perceived enemies of the Nazi regime were murdered — are visible toward the back of the camp. One caption explains how the Nazis used dynamite in January 1945 to destroy the gas chamber and crematorium in an attempt to hide their crimes.

Auschwitz was one of the 20,000 extermination, forced labor or prison camps the Nazis used to carry out their genocide. Although Auschwitz has been preserved as a memorial, most other sites were intentionally destroyed, or returned to their former use after the war.

For decades, though, historians have searched to identify unmarked sites and locate hidden mass graves. In more recent years, scientists have joined the investigation and are using new technologies — from remote sensing to aerial imaging — to uncover these long-hidden atrocities.

Many Holocaust victims were not deported to extermination camps. Instead, they were murdered near their homes and buried in mass graves.

Millions of people were killed in what is now Belarus, Estonia, Latvia, Lithuania, Moldova, Russia and Ukraine. Witnesses and survivors describe roundups ranging from a few victims to thousands of people. Nazis typically forced victims to remove their clothing and stand near an open pit before they shot them.

Witnesses to atrocities have provided testimony, which has helped researchers identify and mark mass graves. One search organization, Yahad-In Unum, has an interactive online map that documents 1,911 execution sites. At the Ukrainian city of Vysots’k, for example, researchers conducted interviews with locals who witnessed the massacre of 1,500 Jewish people in September 1942. The mass grave is now memorialized with a marker.

Witnesses, however, are not always available to provide researchers with detailed accounts. And because Jewish law forbids exhumation, forensic anthropologists cannot conduct excavations like they did to investigate the genocides in Rwanda and the former country of Yugoslavia. New technologies, however, are helping scientists understand what is beneath the surface without having to dig deep.

The Nazis built a work and an extermination camp near Treblinka, Poland. An estimated 900,000 victims died at the extermination camp, and another 12,000 died at the work camp. When the Nazis abandoned the camps in 1943, they intentionally razed all structures, including the gas chambers and crematorium. Over the years, the vegetation grew back; on the surface, there was no indication it was the location of the Holocaust's second-deadliest extermination camp.

But in 2010, a team of forensic anthropologists from the Center of Archaeology in Staffordshire, England, began investigating the site. The researchers used technologies such as remote sensing to analyze the land without having to disturb it. With remote sensing, high-frequency radio waves are aimed into the ground. The length of time it takes for the wave to return to the antenna indicates whether objects are below. Similar to how a side-scan sonar finds objects in the water, remote sensing creates a map of what lies beneath.

The team also took to the sky to — somewhat paradoxically — take a closer look ground. They used airborne laser scanning, which attaches a scanner to an aircraft and emits pulses of light to create a detailed map of the landscape below.

Using digital photogrammetry, a technique that allows scientists to obtain high-precision measurements from photographs, the team was also able generate 3D maps of the area. This approach allowed them to find unmarked graves to the south of the camp. Beyond that, they identified where specific structures had once stood, including bunkers, a kitchen and a latrine.

The team then conducted targeted digs in the areas where they suspected the gas chambers and crematorium once stood.  They uncovered more than 100 terracotta floor tiles, which had been used in the gas chambers. The researchers identified the tiles as the same type used in bath houses for Jewish rituals, and they believed the Nazis had intentionally used the familiar-looking slates to deceive the victims into thinking they were going to communal showers, not gas chambers.

Beneath the Pine Trees

As many as 250,000 victims were murdered at the Sobibór extermination camp in Poland. Most victims were gassed within hours of arrival, and several-hundred prisoners were kept alive as slave labor. After a failed prisoner revolt in 1943, the Nazis closed the camp, destroyed the buildings and planted pine trees. Local residents looted the remains and searched for valuables.

The trees grew tall in the abandoned area. In the 1960s, part of the former camp was covered in blacktop. There was little indication to passersby that the fourth most deadly extermination camp in the Holocaust lay beneath.

In the early 2010s, a pair of archaeologists began investigating Sobibór with non-invasive technologies. Similar to the Treblinka researchers, they used aerial imaging to identify changes in the area's topography. In 2011, they made their first key discovery — a pair of fence posts that survivors said led to the gas chambers.

With permission from the local rabbi, the team was able to dig under the blacktop and locate the crematorium. They unearthed many personal items that once belonged to the victims, as well as the start of a tunnel that prisoners had created in hopes of escaping. The tunnel was found in a satellite camp with no survivors, and the find helps scholars better understand the prisoners’ experience.

But there are still countless other sites from the Holocaust without survivors or eyewitness accounts. More recently, researchers used ground-penetrating radar to find a possible mass grave in Lithuania, according to a study published in The Geological Society of America in 2018. "The larger context," said Harry Jol, a physical geographer at the University of Wisconsin-Eau Claire, in a prepared statement, "is that, within the holocaust in Lithuania, every small and large town has a mass gravesite." In places like these, forensic archaeology techniques can continue to help researchers dig up the truth.