Side-scan sonar can reveal a clear picture of seafloors and many underwater worlds. With affordable devices, it's now serving scientists, law enforcement and hobbyists alike. 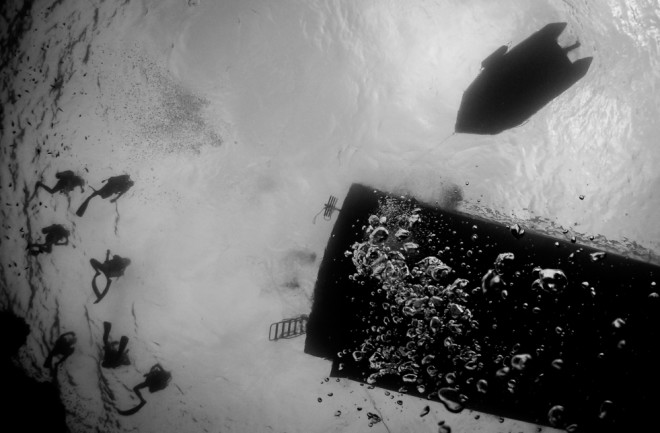 In late December, Jeremy Sides climbed into a raft on the Calfkiller River in Tennessee, started the engine, and pulled the cover off his side-scan sonar. As he cruised up and down the river, the imaging system showed a depth of about 13 feet and the occasional school of fish.

But Sides wasn’t on the river to fish. He’s a YouTuber from Georgia who searches rivers and lakes with sonar equipment and films his finds, sharing them on his Exploring with Nug YouTube channel. This time, he was looking for a 1988 Pontiac Grand Am he suspected might be in the river.  The car was last seen in April of 2000 when two teenagers, Erin Foster and Jeremy Bechtel, drove away in Foster’s vehicle and were never seen again. The case went cold until Sides learned about it from a missing persons database and decided to conduct his own investigation.

The sonar eventually showed the image Sides had been looking for — a car beneath his raft. He changed into his scuba gear, dove toward the submerged car and brushed thick algae from the back license plate. It was indeed the lost Pontiac. Law enforcement later recovered the car and found human remains inside, which have been submitted for testing and identification.

The discovery was made possible by underwater sonar, a technology first introduced in the early 20th century. For decades, the high cost meant only the military or well-funded research institutions could map seafloors. Increased affordability now allows people to pick one up at their local sporting goods store, which means people know more than ever about what lies beneath the surface.

Sound, not light, is used to create maps of seafloors. “Light doesn’t propagate very far,” says Guy Meadows, director of the Marine Engineering Laboratory at the Great Lakes Research Center at Michigan Technological University. “Even in the clearest ocean water, it only propagates 50 to 100 meters, but sound waves travel very well in water.”

There are two types of sonar – active and passive. Active emits a sound into the water. The sound bounces off of an object below and the echo returns to the sonar transducer. The distance is measured by the time it takes for the sound to return and the strength of the returning sound. Passive sonar, in contrast, doesn’t emit sounds. It only listens. This can be used in instances such as military maneuvers, when a vessel doesn’t want to be detected.

Active sonars vary in the number of beams used as well as the direction in which they travel. “The simplest is a fish finder that most boats have,” Meadows says. “It sends a beam down, it bounces off fish, and tells you where the bottom is.”

Fish finders use single-beam sonar. These beams typically use low-frequency signals that are transmitted in short pulses. Multibeam sonars became more common in the 1980s and allowed for a greater mapping of the seafloor. Side-scan sonar uses multiple beams that travel at an angle and create a more complete picture.

“It gives us a nice picture of the ocean bottom. Depending how sophisticated the sonar is, we can learn all sorts of things about the bottom,” Meadows says.

Variations of side-scan sonar devices can map a distance ranging from 10 meters to 60 kilometers. In addition to scanners that attach to vessels, scientists also have submergible scanners. Meadows says his team has an autonomous vehicle with a side-scan sonar that can map a seabed for up to eight hours at a time and construct precise dimensions of the murky depths below.

A Multitude of Maps

Scientists use side-scan sonar for archeological, ecological and environmental studies.

Mapping a seabed, for example, helps scientists understand how the ecosystem is changing due to climate change or the introduction of an invasive species. Meadows’ research center is monitoring areas in the Great Lakes that are infested with an invasive plant, the Eurasian watermilfoil. His team uses side-scan sonar to map the bottom of known infested areas to determine whether mitigation efforts are working or if the species is spreading.

Researchers have used it for archeological purposes in the Great Lakes, too. Meadows says the Great Lakes were once covered by ice. When that ice receded, Caribou moved north and hunters followed.  Now there is a ridge in Lake Huron that scientists have identified as a former hunting ground. “We see ruminants of stone structures that were clearly placed by humans,” he says.

Historic research also relies on side-scan sonar when historians search for sunken ships. In 1985, side-scan sonar was used to locate the sunken Titanic. More recently,  the slave ship Clotilda was found in the Mobile River in 2019.

In the Great Lakes, Meadows says modern shipping dates back to the 1600s, and there is a long list of vessels that disappeared. “There were many ships that left port that were never seen again,” he says.

Academic institutions like Meadows’ are often asked by law enforcement to use their side-scan sonars to recover cars or weapons used in a crime. Increasingly, law enforcement agencies are also receiving help from hobbyists like Sides.

“I do it because it feels right,” Sides says. “It needs to be done, and I’m capable of doing it. Missing people are being found all over.”