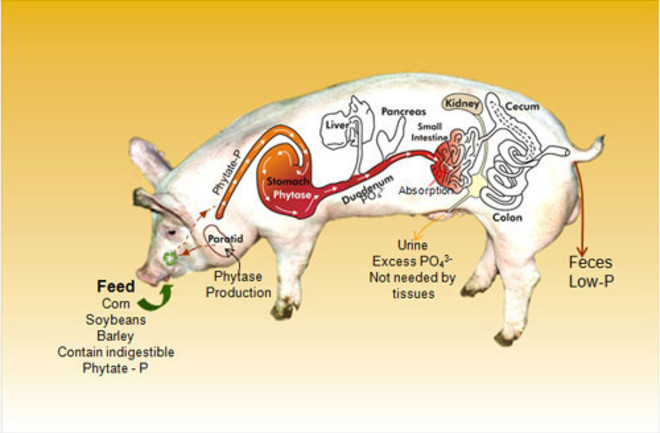 Canada has approved for limited production a genetically engineered, environmentally friendly pig. The "Enviropig" has been genetically modified in such a manner that its urine and feces contain almost 65 percent less phosphorus than usual.

That could be good news for lakes, rivers, and ocean deltas, where phosphorous from animal waste can play a role in causing algal blooms. These outbursts of algae rapidly deplete the water's oxygen, creating vast dead zones for fish and other aquatic life [National Geographic].

All living creatures need phosphorus, as the element plays an important role in many cellular and organ functions. Domesticated pigs get their daily dose from corn or cereal grains, but not without a struggle. These foods contain a type of phosphorus that is indigestible to the pigs, so farmers also feed their pigs an enzyme called phytase to allow the animals to break down and digest the phosphorus.

But ingested phytase isn't as effective at breaking down phosphorus as phytase created inside the pig would be, so a fair amount of the element gets flushed out in pig waste. That waste, in turn, can make its way into the water supply

To fix this problem, the scientists tinkered with the swine's genes to make the pig produce its own phytase in its salivary glands. When the cereal grains are consumed, they mix with the phytase in the saliva, and throughout the pig's digestive tract the enzyme works to break down the phosphorous in the food. With more phosphorus retained within the body, the amount excreted in waste is reduced by almost 65 percent, say researchers. The researchers who created the Enviropig say it's not just eco-friendly, but it also cut farmers' feed-supplement costs. If the pigs eventually become common, they could also help U.S. farmers comply with "zero discharge" rules that forbid pork producers from releasing nitrogen or phosphorus runoff. The Enviropigs will be raised only in controlled research settings in Canada for now, and experts say transgenic pork won't be landing on your plate anytime soon; the new biotech pig will face years of safety trials to see if it should be approved for commercial production and consumption in the United States and Canada. No transgenic animal has been approved for consumption as of yet.

But in 2008 the FDA announced approval of the first human health product made from a genetically engineered animal. The goat-derived anticoagulant, ATryn, is used for the prevention of blood clots in patients with a rare disease-causing protein deficiency [National Geographic].

Related Content: 80beats: Likely to Be FDA Approved: Transgenic Goats With Pharmaceutical Milk 80beats: Coming Soon to a Grocery Near You: Genetically Engineered Meat 80beats: Your Quarter-Pounder Just Might Have Come From a Cloned Cow (Indirectly) 80beats: Largest "Dead Zone" Yet Predicted for the Gulf of Mexico DISCOVER: “Frankenfoods” That Could Feed the World (photo gallery) Image: Enviropig/University of Guelph