Largest "Dead Zone" Yet Predicted for the Gulf of Mexico 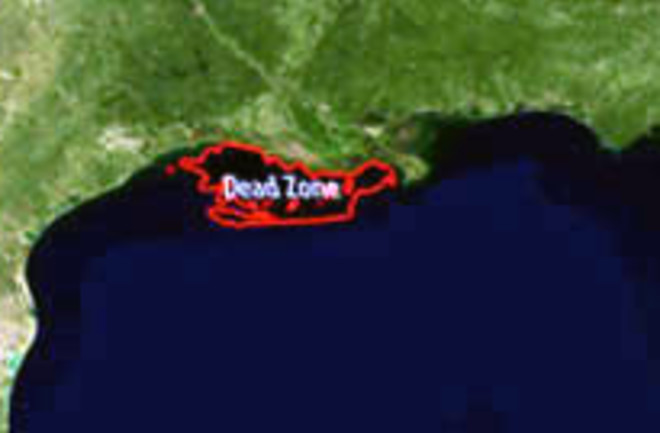 This summer, Louisiana researchers say the "dead zone" in the Gulf of Mexico will reach record size, a prediction that troubles environmentalists and fishermen alike. Researchers say that blame for this record-setting year goes partly to farmers' rising interest in ethanol, and partly to the aftermath of the Midwest flooding.

The dead zone is an area off the coast of Louisiana and Texas where the water's oxygen level drops each summer, creating a zone which can't support most marine life. The low oxygen, or hypoxic, area is primarily caused by high nutrient levels, which stimulates an overgrowth of algae that sinks and decomposes. The decomposition process in turn depletes dissolved oxygen in the water. The dead zone is of particular concern because it threatens valuable commercial and recreational Gulf fisheries [LiveScience].

Louisiana researchers developed a computer model that predicts how big the dead zone will be, using data from the US Geological Survey on how much nitrogen reaches the Gulf of Mexico each spring. This year, the team says more run-off than usual will have reached the Gulf

. They calculated that this summer's dead zone will stretch over 8,800 square miles

, an area about the size of New Jersey. That tops the previous record of

Lead researcher R. Eugene Turner says the increase is in large part due to nitrogen leaking into the Mississippi from a huge increase in corn planting. The recent increase in corn crops is due to the nation’s increased efforts to find alternative fuel resources, such as corn-powered ethanol, he said [The Advocate].

The massive floods that devastated parts of the Midwest in June also washed large amounts of fertilizer from farms and lawns into the Mississippi River, which carried it down to the ocean where it fed the algae blooms.