Likely to Be FDA Approved: Transgenic Goats With Pharmaceutical Milk 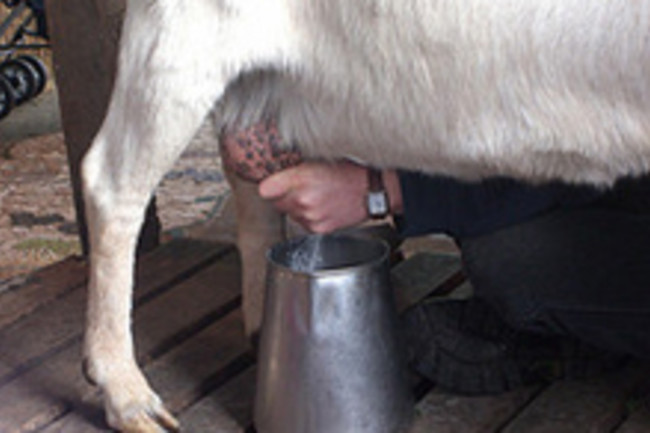 A certain herd of 200 goats on a Massachusetts farm may look bucolic and quaint, but they actually comprise a living, breathing pharmaceutical factory, or "pharm." The goats have been genetically engineered t0 produce a blood-thinning drug in their milk, and a report from the FDA has just declared that the drug is effective and safe for human use. An FDA advisory panel will make a recommendation this Friday on whether to approve the drug for sales; if

the drug is approved, it would be the first application under new FDA regulations that allow animals to be genetically altered to produce drugs, model human disease, produce industrial or consumer products or improve their use as food [USA Today].

The goats, which are being bred by the biotech company GTC Biotherapeutics, produce a protein called antithrombin that prevents blood clotting.

About 1 in 5,000 people don't produce enough of the protein, putting them at risk of developing blood clots in their veins. Such clots can be extremely painful. If they break loose and travel through the bloodstream to the lungs or the brain, the consequences can be catastrophic. Pregnant women with the disorder are at high risk of miscarriage or stillbirth, because of blood clots in the placenta [AP].

While people with the deficiency typically manage their condition with conventional blood thinning drugs, such drugs aren't suitable for surgeries and childbirth, when the risks of blood clots are particularly high--that's where the new drug would come in.

GTC is also developing further studies to test the drug in patients at risk for clots in non-hereditary conditions such as coronary bypass surgery [Reuters].

To make the drug, scientists at GTC put DNA for the human antithrombin protein into single cell embryos of goats. Goat embryos with the gene were then inserted into the wombs of surrogate mothers who gave birth to baby goats carrying the new trait [AP].

The transgenic female goats produce the protein in their milk, which is then refined and purified. GTC Biotherapeutics says that a single goat will produce more than six pounds of the protein in the course of a year, and also notes that the drug-producing trait will be naturally passed down to the next generation of goats. Many biotech companies are investigating "pharming" techniques as a way to produce large quantities of protein drugs in a cheap way. However, some consumer groups are deeply wary of genetically modified animals, whether their products end up in pharmacies or grocery stores.

"The regulatory process seems to have put the cart before the horse, analyzing the safety of the product before it has opined on the safety of the manufacturing process," says Greg Jaffe of the Center for Science in the Public Interest. "FDA clearly needs to impose cradle-to-grave conditions to prevent the goats from leaving the farm or their products from entering the food supply" [USA Today].

Related Content: 80beats: Coming Soon to a Grocery Near You: Genetically Engineered Meat 80beats: Your Quarter-Pounder Just Might Have Come From a Cloned Cow (Indirectly) Discoblog: Live From the Biggest Science Conference in the World: First GMOs, Now Pharming?