Is That a Sausage in Your Petri Dish? 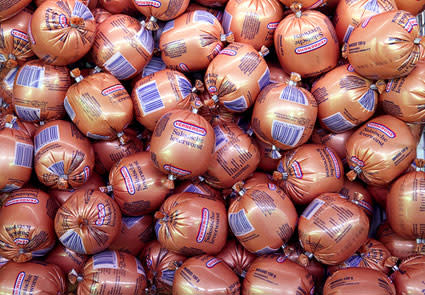 may be made of people, but in the future that biomedical engineer Mark Post envisions, Soylent Pink is his lab-grown pork sausage. Lab-grown meat could reduce the need for farm animals, Post told Nature's Nicola Jones:

"I realized this could have much greater impact than any of the medical work I'd been doing over 20 years — in terms of environmental benefits, health benefits, benefits against world starvation," he says.

Before his future comes, there are several hurdles

lab-meat researchers need to jump. Post believes he is close, though, and estimates that he could produce a single "demonstration" sausage in a year--if he can just round up about $250,000 in funding. Making Muscles: Post isolates adult muscle stem cells taken from a biopsy of a live pig, and grows the cells in the lab. Another researcher, Morris Benjaminson

, uses the whole biopsy, and even grew a goldfish fillet in the lab (almost doubling the size of the biopsy by adding extra cells). But adult cells can't grow forever; the telomeres

on the ends of their chromosomes shorten to the point of no return. Researchers can add an enzyme called telomerase, which fixes the telomeres, or add a tumor-growth-promoting gene that allows the cells to keep on dividing--although advertising a lab meat "now with extra tumor!" might be a challenge. Embryonic stem cells would provide an immortal stock of cells, but researchers haven't been able to produce them from livestock yet. Beefing Up the Beef: Growing muscles cells isn't enough. The muscle fibers need to be exercised to bulk up their protein content, Post explained to Nature

Lab-assembled muscles are weak and textureless. "It's like when you take off a cast after six weeks," says Post.

The cells can either be stretched onto a scaffold, allowing the cells to flex naturally, or they can be repeatedly shocked, though this isn't really energy efficient. To add another difficulty, the cell strips can actually get too ripped, and start dying in the middle (where there is no nutrient or oxygen available). Making Lab Meat Animal-Free: Currently the cells are grown in a cell-culture medium that contains fetal calf or horse serum, which, since it needs to be harvested from fetal animals, kinda defeats the ethical purpose of lab-grown meat. Switching to a serum-free process is expensive and difficult, since companies that sell animal-free culture media keep their recipes secret. But there are a few promising leads: Surprisingly, Benjaminson found that ground-up maitake mushrooms work as well as calf serum, and others are looking to blue-green algae. Meaty Marketing: Considering all the work and scaling up that needs to be done, the rough estimate for the cost of lab-produced meat is about twice that of farmed chicken meat. Some researchers, like Vladimir Mironov

, believe this priciness can be a good thing, with the potential of turning the fake meat into a designer product. He told Nature's Nicola Jones

meat into a 'functional' food attractive to the rich and famous, perhaps by filling it with compounds that promote health or suppress appetite. "Only Hollywood celebrities like Paris will be eating this," he says.

But how does it taste? Only one person has ingested the pork product, Post told Nature

"He just took it with tweezers out of the culture dish and stuffed it in his mouth before I could say anything," says Post. "He said it was chewy and tasteless."

Doesn't sound like anything Paris would want to eat--at least not yet. Still interested? Read the entire article online at Nature.com

80beats: Are Pain-Free Animals the Future of Meat?

DISCOVER: I'll Have My Burger Petri-Dish Bred, With Extra Omega-3