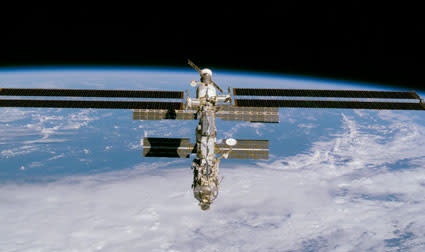 In a strange side effect of Russia's invasion of Georgia this weekend, the U.S. may lose access to Russia's Soyuz spacecrafts that were expected to ferry NASA astronauts to the International Space Station after the retirement of the space shuttle fleet in 2010. Florida Senator Bill Nelson says that because of Russia's new aggression, the U.S. Congress may refuse to pass an exemption required to let NASA buy services from Russia.

Under a law known as the Iran Non-Proliferation Act, the United States is banned

from buying space technology from Russia unless the president determines Russia is taking steps to prevent the proliferation of nuclear and missile technology to Iran. Congress waived the ban in 2005, allowing NASA to enter into a $719 million contract with the Russians for use of the Soyuz through 2011 [CNN].

But an extension of the waiver needs to be passed to guarantee access to the Space Station after 2011.

With the space shuttle’s replacement not scheduled to fly until 2015, the U.S. will be dependent on Russia to ferry astronauts to the space station for at least five years. Under international agreements that created the station, NASA also needs the Soyuz to meet its obligation to provide enough lifeboats for the station’s American and international crew in case of emergency [Orlando Sentinel].

NASA had hoped to narrow the five-year gap by accelerating the development of the space shuttle's replacement, the Orion spacecraft, but earlier this week NASA announced that a faster deployment wouldn't be possible. Another alternative, encouraging private space companies to develop rockets that can ferry cargo and crew, encountered a setback earlier this month when the company SpaceX failed to send a rocket to orbit on its third try. Senator Nelson says the waiver will face serious opposition in Congress, especially during an election year.

"It was a tough sell before, but it was doable simply because we didn't have a choice. We don't want to deny ourselves access to the space station, the very place we have built and paid," Nelson said. "It's going to be a tougher sell now unless there are critical developments during the next 48 to 72 hours" [Florida Today].

Meanwhile, a senior House Republican staffer said the waiver is “dead on arrival. Nobody thinks it’s going to happen, and the reality is there is no back-up plan for the space station” [