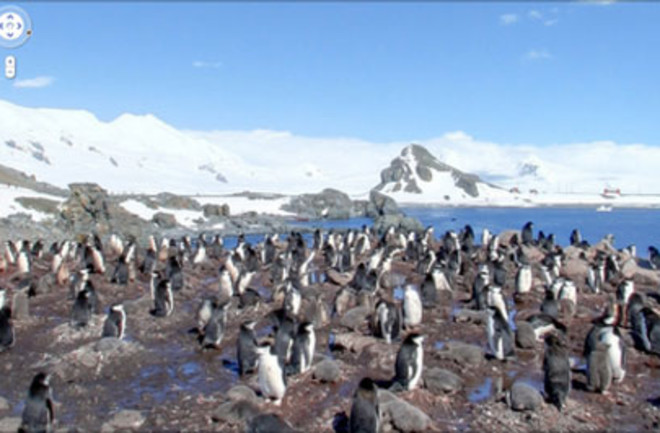 Google's expansion of its Street View project to all seven continents has the sweet reward of allowing you to visit Antarctica while sitting on your couch in your leopard-print snuggie. (They also filled in the holes of Ireland and Brazil, but much as we love those countries, Antarctica is still more exciting.) Ed Parsons, Google's geospatial technologist, told The Guardian that this feat was "hugely significant" to the Goog:

"One of the challenges we wanted to crack is to go to these remote places, and one of geo team at Google went to Antarctica so he took some kit and took some imagery. It's called Street View, but there aren't many streets in Antarctica," he said. "This allows people to understand the contrast between New York Times Square and being on the edge of a glacier looking at penguins."

It's also making the chinstrap penguins and red-parka'd researchers

that inhabit the island the victims of some pretty intense privacy invasion. The images were shot in Half Moon Island, a part of the South Shetland Island chain in the northern most part of the continent, under South America. You can explore the colony and other views of the earth on Google's Street View gallery

. The Antarctica views were shot by Google's own Brian McClendon, vice-president of engineering, who carried around a camera while visiting the area with his wife. He announced the new features in a blog post

We hope this new imagery will help people in Ireland, Brazil, and even the penguins of Antarctica to navigate nearby, as well as enable people around the world to learn more about these areas.

Not Exactly Rocket Science: A fossil penguin gets its colours

Not Exactly Rocket Science: Are emperor penguins marching to extinction?