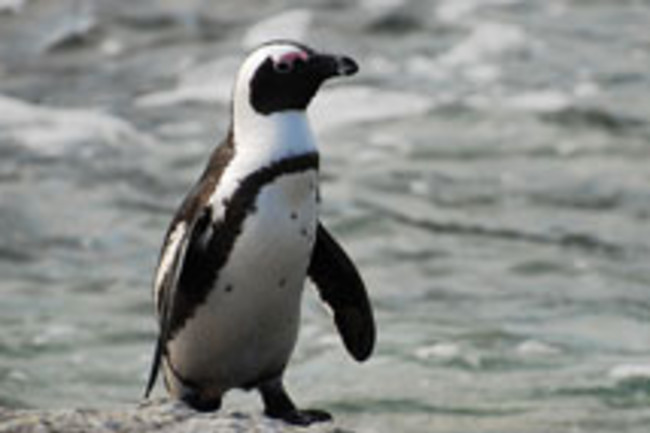 Researchers are about to get to know the 20,000 African penguins that live on Robben Island, South Africa in intimate detail, down to the last feather. A new computer program will use pictures of the penguins going about their daily business to identify each individual based on the distinct pattern of black spots on its belly. Each bird's markings are as unique as a human fingerprint, researchers say.

Previously, researchers had to clip metal ID tags onto the penguins if they wanted to keep track of them, but that system was less than ideal. This new biometric solution has

the advantage over tags as it can operate without the birds having to be caught, which greatly reduces stress on penguin and scientist. "These penguins are vicious, nasty things that bite and scratch. They have very sharp beaks. I do love them but, by God, they can hurt," said Professor Peter Barham, of Bristol University.... "It's no fun trying to get tags on them" [Telegraph].

To gather the data, a camera is hidden at ground level on a path the penguins use to reach the sea each day. Footage is sent to a computer running [the identification] software.... If a bird is not in full view it abandons the ID attempt, but when the chest is clearly visible the software generates a 2D map of the black plumage spots [New Scientist].

Researchers say that the software will help them learn about the birds' habits, and will provide information to those fighting to protect the penguins. There were more than a million African penguins at the start of the 20th century, but today only about 170,000 remain. The birds have been buffeted by loss of habitat and by human harvesting of their eggs; in recent years researchers have begun worrying that climate change is shifting the penguins' main food stock, anchovies and sardines, out of the penguins' range. It's likely that penguins won't be the only beneficiaries of this new technology.

Professor Barham said: "For any species with patterned plumage, cheetahs or whale sharks for example, then the same technology could use the patterns as individual identifiers. "You just have to train the system to spot a particular species, then to find the areas where the pattern is likely to occur and then to process this information" [BBC News].