Are emperor penguins marching to extinction?

The emperor penguin - caring parent, extreme survivor and unwitting movie-star - could be marching to extinction by the turn of the next century. In its Antarctic home, the penguins frequently have to deal with prolonged bouts of starvation, frosty temperatures of -40 degrees Celsius, and biting polar winds that blow at 90 miles per hour. And yet this icy environment that so brutally tests the penguins' endurance is also critical to their survival. This is a species that depends on sea ice for breeding and feeding. 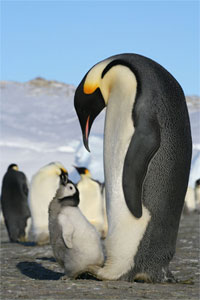 So what will happen to the emperor penguin as Antarctica's sea ice shrinks, as it assuredly will in the face of a warming globe? Stephanie Jenouvrier from the Woods Hole Oceanographic Institution have tried to answer that question by combining the forty years of census data on a specific emperor colony with the latest models from the Intergovernmental Panel on Climate Change (IPCC).

The results are not encouraging. They suggest that the number of emperors in a large colony at Terre Adelie (where March of the Penguins was filmed) will fall from about 6,000 breeding pairs at the moment to a mere 400 by 2100. There's even a one in three chance that the population will drop by 95%- a level described as "quasi-extinction", when the population is so small that it's unlikely to sustain itself.

The fates of the emperor penguin are tied to the extent of the sea ice in a complicated way. Colonies live far inland and adults make long foraging trips to the ocean. If the ice cover is too extensive, the penguins burn more energy on their travels to the water and aren't able to provide as much food for their chicks. Then again, their fishy prey depend on small crustaceans called krill and these fall in number when the sea ice breaks up. The resulting lack of food and the possibility that the ice they roost on may break up, means that adult survival is jeopardised if there's not enough ice around.

This tenuous relationship was made dramatically clear in the 1970s when shifting winds brought warm subtropical air to Antarctica and created unusually warm winters. In Terre Adelie, the ice cover decreased by 11%, and the local emperor population halved.

To predict the fate of the penguins, Jenouvrier used 10 different climate models from the IPCC that forecasted the extent of the sea ice and the frequency of warm spells in Antarctica (like that seen in Terre Adelie) until the end of the century. She combined these with information on the entire life cycle of the emperors and the health of the Terre Adelie colony over 60 years.

The climate models took a "business as usual" outlook, where the world of the future fuels its rapid economic growth through the continued use of fossil fuels, as well as some renewable sources. According to these projections, levels of carbon dioxide will double from 360 parts per million in preindustrial times to 720 ppm in 2100. While the details differed, all of them predicted a greater frequency of warm spells and a shrinking of the sea ice.

For each of the 10 models, Jenouvrier created 1,000 separate population projections for the emperors. Averaged out, these simulations painted a picture of a population that remained fairly stable between 2000 and 2006 (which matched the actual census data) and would start to fall soon after. The emperors' decline will speed up after 2018 and eventually fall to a low of 400 breeding pairs by 2100 - just 7% of their current numbers.

Of course, that's an average pattern - there was naturally a lot of variation within the team's 10,000 simulations, but every single one of them had the penguin population as either quasi-extinct or declining strongly by 2100.

Accurate predictions, or unnecessary scaremongering? Jenouvrier certainly puts a strong case for the former. She argues that, if anything, her estimates are too optimistic. Her models assume that future warm spells in Antarctica will be no more severe than the 1970s event that so badly slashed the penguin population. However, the IPCC predicts that the warm years of the future will be warmer than those of today, so taking that into account would only increase the emperors' risk of quasi-extinction.

For the emperor penguin, there are only a few options. They could make small adjustments to the life cycle to compensate for their shifting environment, but they may not be able to do so fast enough. Other seabirds at Terre Adelie have shifted their breeding and egg-laying timings to adapt to the changing climate, but the penguins haven't. It's possible that their long generation times make them particularly bad at responding to new evolutionary pressures.

The alternative is to move. The northernmost part of the Antarctic Peninsula, where the effects of global warming have been felt most strongly, is not an option; there, only a few breeding pairs of emperors eke out an existence today. The southernmost populations in the Ross sea are stable for the moment, and have benefited from a recent glut of sea ice. For now, it's a penguin sanctuary, but even this steadfast home may shrink away as the world warms.