A Penny-Sized Nuclear Battery Could Keep Going, and Going... 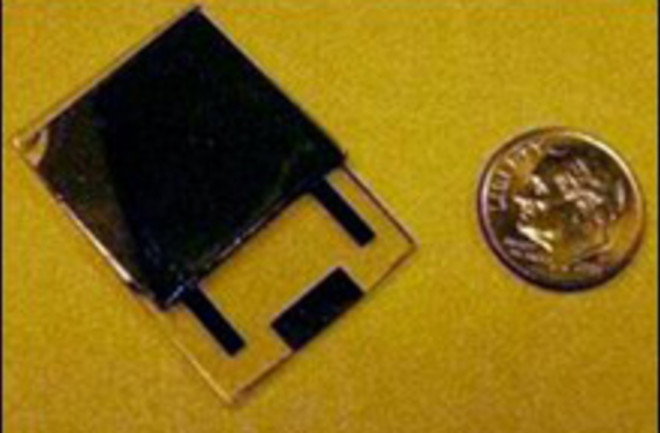 Tired of cellphones and other electronic gadgets that run out of juice too quickly? Then you can happily look forward to further developments from the lab of researcher Jae Wan Kwon, who has developed a long-lasting nuclear battery the size and thickness of a penny. In time, Kwon hopes to get the size down so that the battery is no thicker than a human hair. The batteries pose no danger of a nuclear meltdown, Kwon notes.

As the isotope naturally decays, the charged particles released can be used to create an electrical current. Nuclear batteries, which hold their charges for years, are already used in some specialty fields. For example, they're used to power spacecraft that are voyaging too far from the sun to run on solar panels, and also in pacemakers, since changing a battery inside the body would be rather inconvenient. But the existing batteries are large and expensive. In the study, published in Applied Physics Letters, the researchers explain that they cut down on the battery's size by changing some materials.

“The critical part of using a radioactive battery is that when you harvest the energy, part of the radiation energy can damage the lattice structure of the solid semiconductor,” Kwon said. “By using a liquid semiconductor, we believe we can minimize that problem” [Gizmag].

Usually, the batteries have to be made large enough to withstand the damage for the duration of the isotope's decay, but the new design allows the battery to be much tinier. The inventors developed the battery

in an attempt to scale down power sources for the tiny devices that fall under the category of micro- and nano-electromechanical systems.... The means to power such devices has been a subject of study as vigorous as the development of the devices themselves [BBC News].

For the moment, the battery also delivers only a micro- or nano-sized energy burst, but Kwon and his colleagues are working on it. Related Content: 80beats: More Plutonium, Please: DoE Promises to Cook up More Spaceship Fuel 80beats: Could Mini-Nuclear Reactors Power Developing World Villages? 80beats: Improved Batteries for Electric Cars Could Recharge in Seconds 80beats: New “Nanogenerator” Could Power Your iPod With Your Own MovementsImage: Jae Wan Kwon, et al.