Improved Batteries for Electric Cars Could Recharge in Seconds 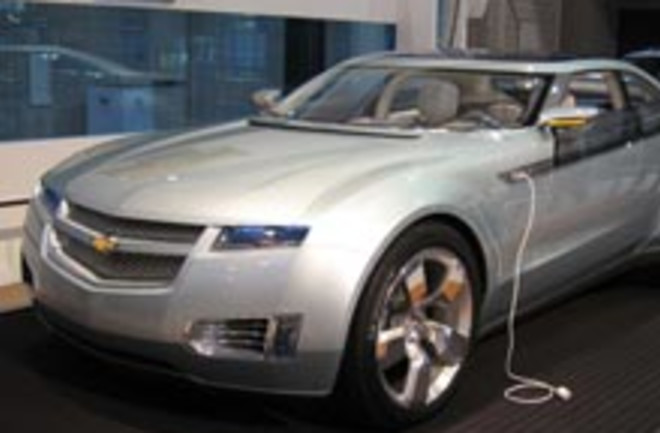 Researchers may have found a way to drastically increase the performance of the lithium ion batteries that power everything from electric cars to laptops. By reconfiguring the battery to allow lithium ions to rush in and out about 100 times faster than before, researchers say they've created a prototype that provides fast bursts of power and also, crucially, recharges in seconds.

A prototype of a battery made with the new technique could be charged in less than 20 seconds compared to the six minutes it took to charge cells made in the standard way [Australian Broadcasting Corporation].

Lithium ion batteries are capable of storing a great deal of energy, and have therefore been selected for use in electric cars like the Tesla Roadster (which uses 6,831 individual cells) and the Chevy Volt. But getting the lithium ions

in and out is a drawn-out affair. This phenomenon explains why some electric vehicles (the rip-roaring $109,000 Tesla Roadster with its massive battery pack excluded) can reach high speeds, but they suffer from poor acceleration compared with the propulsive force unleashed by the rapid succession of mini explosions in an internal combustion engine. The slow exchange of ions also means lithium ion batteries recharge slowly—just think of how long you have to charge your tiny cell phone [Scientific American].

Researcher Gerbrand Ceder and his team studied the movement of ions through the traditional lithium iron phosphate battery material, and found that

lithium ions travel through tunnels accessed from the surface of the material. If a lithium ion at the surface is directly in front of a tunnel entrance, it can quickly deliver a charge. But if the ion is not at the entrance, it cannot easily move there, making it less efficient at delivering a charge [Reuters].

For the breakthrough, described in a new paper in Nature, researchers created a prototype

nicknamed the “beltway battery”, after the orbital motorway in Washington DC, because it uses a bypass system to let lithium ions that carry charge to enter and leave the battery more quickly [Times Online].

Researchers coated the battery material with a layer of glass-like lithium phosphate, and found that this allowed the ions to speed along their way. Because the reconfigured battery uses standard materials and would require only a slight change to the production process, researchers say the new technology could reach the market within three years. There is one large obstacle to overcome: The batteries might require specialized and expensive charging stations, researchers say, because household electrical outlets aren't capable of delivering energy quickly enough. However, yesterday's discussion of turning the West Coast's Interstate 5 into a "green freeway" studded with alternative fueling stations offers a possible solution, as the rest stops could host the specialized chargers. Related Content: 80beats: “Green Freeway” Would Help Eco-friendly Cars Drive From British Columbia to Baja 80beats: U.S. Battery Makers Team up to Tackle Their Big Challenge: Electric Cars 80beats: Electric Car Startup Tesla Motors Faces Financial Trouble & High Hurdles 80beats: Chrysler Jumps Into Electric Car Race With Three New Vehicles Image: Wikimedia Commons, showing a Chevy Volt prototype