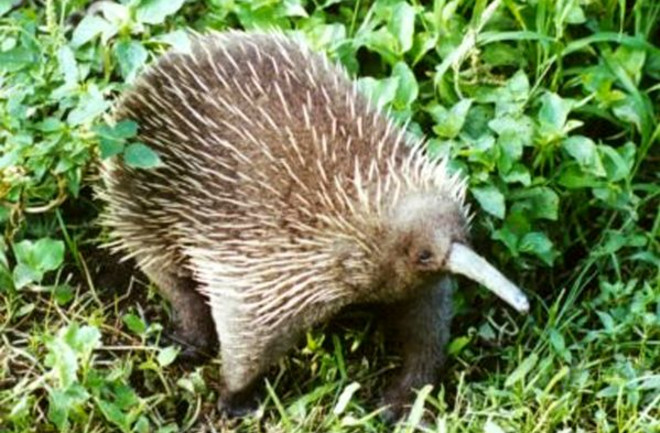 We all know Schrödinger's cat, right? It's a neat thought experiment (and one of the best analogies for quantum physics) but the situation always felt a bit forced to me. When are you really going to find a cat in a box with a radioactive substance and a flask of poison?

So here's a more realistic version of the quantum analogy, one, in fact, that's currently playing out in nature. Let me introduce you to Schrödinger's echidna.

In the Cyclops mountains of New Guinea, there once lived, and perhaps still lives, a species of long-beaked echidna: Zaglossus attenboroughi. It's one of just several monotremes, or egg-laying mammals left on the planet, and Sir David's echidna might be one of just a few of its kind still around (if, of course, they still are).

The species is known from a single specimen, somewhat damaged, collected over 50 years ago higher up in the mountains than any echidna was thought to live. Since then, there have been scattered hints of its presence: "Nose pokes," distinctive holes the creatures' bird-like snouts leave in the soft earth as they dig for insects and worms, and anecdotal accounts of the echidna from local hunters.

But this is all circumstantial — hard evidence betraying the animals' continued presence is still lacking. Even if they are around, they're likely in grave danger. Z. attenboroughi probably occupies no more than 20 square kilometers of threatened habitat, giving them precious little room to move and hunt in.

Though other species have beat worse odds and come through, a gambling man might not want to wager on these little guys' survival. And that's where quantum physics comes in.

In Schrödinger's original experiment, he assumed a 50/50 chance of the cat dying within an hour, which is when the box would be examined. For the sake of argument, let's give our echidna friends the same (terrible) chance of survival.

As Schrödinger's paradox states, it's really impossible for us to know whether the echidnas are alive or dead at any given time, so we have to assume that it's both. In the absence of evidence of the echidna's absence or existence, Sir David's echidna exists in a superposition of states, at once present and forever gone from this world — we can't say either way for sure.

It's a seemingly untenable duality when applied to an echidna, but experiments of quantum effects have borne out the reality of superposition, at least for very small particles. Things like photons truly can be in two places at once, up until they are observed. At that point, the wave function that describes the probability of the photon being in various states collapses, and it becomes either one thing or the other.

And what's truly mind-bending about the experiment. The act of observation itself — opening the box — causes the quantum uncertainty to resolve itself. Photons exist in two states as long as we do not look at them — the moment we look, reality aligns itself.

It's a quirk of physics that, at first glance, seems to impart us with god-like powers. Quantum mechanics implies that with the simple act of perception each of us creates reality from a cloud of what-ifs. If the wave functions of alternate realities hang about us, ready to be plucked with a glance, it's tempting to think that we have a sort of supernatural agency over the outcomes of events.

But it's a lie. Though we may be the arbiters of reality, we are not its authors. When a wave function collapses, we cannot influence which form it will take — we cannot reach inside the box and snatch the poison flask from the cat, no matter how much we might wish to.

It's not yet known if, to borrow a phrase from Einstein, God truly does play dice, or whether there are factors that make the decision less than random — but either way, we have no say over the matter.

That brings us back to the quantum echidna. There's no way to know if Sir David's echidna is alive or dead, so that part of the thought experiment holds. But to assume that that functional superposition of states absolves us of responsibility for its life is wrong.

Echidnas are not photons, and they do not exist in a quantum realm beyond human hands. The fact is that we do still have a measure of control over what happens to Zaglossus attenboroughi and the thousands of other species still hanging in the perilous space between existence and exanimate.

In the realm of the natural world, extrapolated by orders of magnitude from the quantum, human wishes can indeed become reality. Echidnas and ghost shrimp, goblin spiders and Peruvian frogs; all of the Attenboroughs I've chronicled and the teeming horde of biological life that sets our planet apart from the lifeless rocks that hang about us in the solar system are real and their fate rests in our hands.

If we want to save endangered species, we possess the tools to do so, quantum mechanics be damned. Establishing protected areas, cutting back on greenhouse gas emissions, supporting the development of sustainable farming and herding techniques — these are all steps we can take that will help ensure the survival of plants and animals the world over.

Our biosphere is no thought experiment and the fate of the planet is not a wave function. When it comes to the universe, we may not have much control over what happens. But where we do, in our own home, we cannot feign helplessness.