A spider, a goblin. 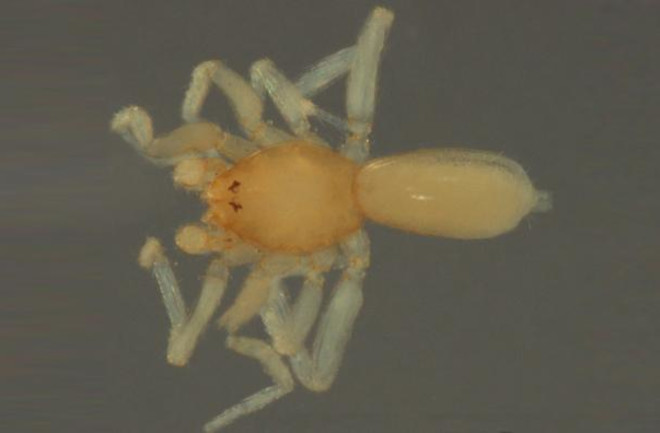 These goblins don't work in banks, nor do they lurk in basements. They do, however, creep through the underbrush and conceal themselves in forest canopies in the hopes of waylaying oblivious passers-by.

Goblin spiders are tiny, usually on the order of just a few millimeters long, but they can be ferocious hunters. One paper describes them leaping onto the backs of springtails and biting them into submission, despite their unfortunate steed's attempts to throw them off.

There are many species, and they live all over the world, though some are found only in very specific habitats. Many, in fact, are found trapped in amber dating from millions of years ago, and records of goblin spiders extend back to the Cretaceous.

Prethopalpus attenboroughi, for example, has been found only on Horn Island, which sits just off the northern tip of mainland Queensland in Australia. The species, Attenborough's goblin spider, was discovered in 1986, but it didn't get recognized as its own species until 2012, which seems to be how it often goes in the world of insects and arachnids — there's just too much new stuff to go around.

If you want to know whether the tiny arachnid leaping at you from under a leaf is indeed a goblin spider, the easiest method of identification will be a quick eye count. You see, unlike most spiders, which have eight eyes, goblin spiders decided long ago that four pairs was a little too show-offy and ditched a set. P. attenboroughi has six eyes, some species of goblin spiders have even less, and a few are totally eyeless. After all, it's not how many eyes you have that counts, it's, well, it's something else hopefully.

The genus is distinguished in part by its genitalia, not an uncommon thing among spiders and other insects, where its often the only way to tell species apart. Subtle differences to the pedipalps, a pair of appendages that male spiders use to transfer sperm to females, distinguish Prethopalpus from the rest of their ilk.

There doesn't seem to be anything in particular that made the researchers decide that this species deserved the name "Attenborough," though Dave A. had nothing but kind words for the species.

"I take it that it is careful in its judgement, merciless, certainly beautiful and I will treasure it and I thank you very much indeed for this," he said, according to the BBC.

Bonus Attenborough Fact of the Week: