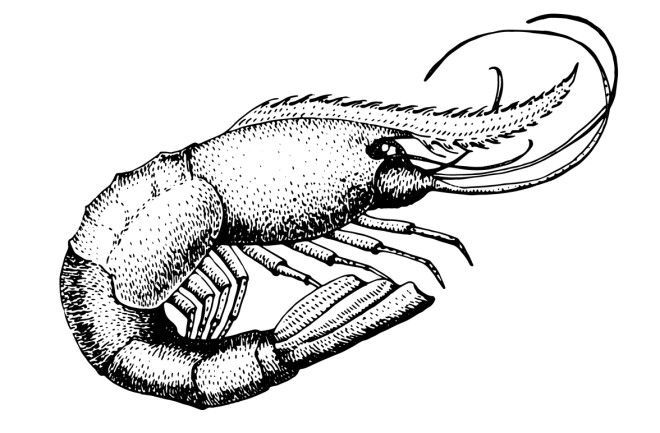 So ghostly we can't even show you a real picture. This is just a regular shrimp. (Credit: Lubov Chipurko/Shutterstock)

Some species are so rare, so secluded or timid that they flit through our consciousness like a ghost. Perhaps they're known from no more than a single specimen, others, undoubtedly, exist only in the hazy halls of rumor. The diversity of life is too great for us, a single species, to pin every bit of biodiversity under the spotlight of science.

Take as an example the ghost shrimp, Ctenocheloides attenboroughi (click through for a picture). The species is known from a single individual, found in shallow water off the coast of Madagascar in a bay surrounded by mangrove trees.

Like other ghost shrimp, females sport a see-through carapace, through which internal structures flare bright red. It's got shorter claws and better-developed corneas than its closest relatives, according to the paper that formally enters it into the scientific record. There's but a single picture online.

Though the observational record is obviously somewhat lacking, C. attenboroughi probably makes its home in burrows dug into the muddy ocean floor as other ghost shrimp do. Shrimp feed on a variety of things, ranging from dead fish and other sea life to algae and tiny bits of organic matter floating in the water.

Attenborough's ghost shrimp likely falls somewhere within this spectrum, though, honestly, it could eat giant squid for all we know about it. In recent years, at least two more species have been added to the Ctenocheloides genus, one in Papua New Guinea, one in Brazil, although details about them are just as sparse.

Three creatures, three species, all similar but separated by thousands and thousands of miles, an indication that they are probably spread far and wide around the globe. Perhaps we'll find more of them, or maybe we never will.

There are about 1.5 million species currently known of, though researchers project that there are likely well over a billion out there (most are bacteria). In the Amazon alone, scientists discovered a new species every other day on average in 2014 and 2015. Many of them are likely known from just a single individual, making them ghosts of a sort, as well.

Like the ghost shrimp, perhaps they will vanish quietly back into the ocean, or the rain forest, or the desert—a single breadcrumb that never becomes a trail.

It can be daunting to try and catalogue the entirety of nature in the face of so much diversity. But as anyone who's ever had the pleasure of experiencing nature through the sheer enthusiasm of a certain David Attenborough knows, even seeing a sliver of the world is reward enough. And, if you want another taste, Arthur Anker's Flickr account (the zoologist who discovered Attenborough's ghost shrimp) is worth a look too.

Bonus Attenborough fact of the week:  David Attenborough, along with Slash and Brian May, made a song about badgers.