Why the Neighbors of GM Corn Farms See the Greatest Benefit 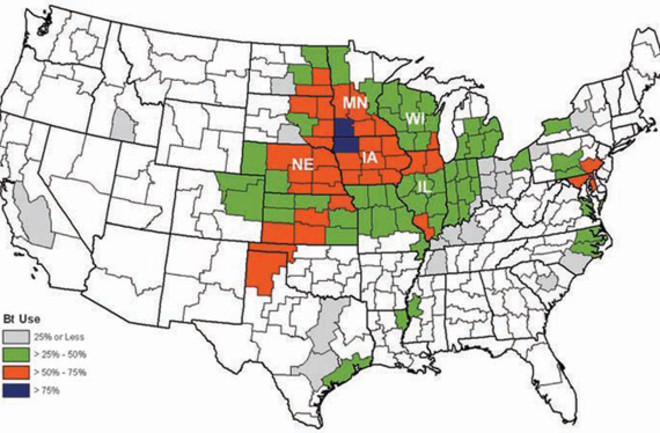 Plant genetically modified corn, help your neighbor? That's the argument of a study out in Science today—corn modified to keep pests away creates a "halo effect" that also reduces crop damage at neighboring farms that don't plant the pest-resistant variety. Bill Hutchison of the University of Minnesota led the study, which surveyed the records going back to 1996 for Minnesota and four other Corn Belt states: Nebraska, Iowa, Wisconsin, and Illinois. 1996 is the key year because that's when farmers first planed Bt corn, a variety modified to produce a toxin that keeps away the European corn borer. As the name suggests, that insect is an invader from across the pond that likes to devour corn, and Hutchison and colleagues wanted to see how effectively Bt corn kept the pest at bay during the last decade and a half.

"We were surprised to find that a higher proportion of the total benefit is actually going to the non-Bt farmers," says Hutchison. The reason for the conventional farmers' windfall is tied up in the effectiveness of the transgenic crop. Not only does Bt maize suppress the corn-borer population in fields planted with the GM crop, it exerts a 'halo effect', lowering the pest population in conventional maize fields too. As a result, farmers planting non-GM crops benefit from fewer pests, but don't have to pay the higher prices for the GM seeds. [Nature]

Why don't the corn borers

simply flock to the non-Bt fields and wreak havoc there? I called Hutchison, who explained: "The female moths can't tell Bt corn from non-Bt corn" when they go to deposit their offspring. So, he says, imagine a section of land that's 80 percent Bt. If the females moths distributed their young evenly across that territory, 80 percent would be in Bt corn, and they would die. "The same thing happens the next generation," he says, which leads to an overall decline in borer population that benefits everyone. But because the non-Bt growers didn't pay the premium for the modified seed, they received the greatest benefit.

[The scientists] valued the extra corn harvested because of the reduction in corn borer numbers and took into account the extra $1.7 billion farmers had paid for the GM seeds, equivalent to $10-20 per hectare. The total benefit was $6.8 billion but they found it was not evenly distributed: non-GM fields gained two-thirds of the total benefit, despite making up only one-third of the land. [The Guardian]

At the moment, 63 percent of U.S. corn is Bt; you can see the distribution in the map above. As for Hutchison's example, he didn't pluck the 80 percent figure out of nowhere—that's been the highest percentage EPA

has allowed farmers to plant because of worries that a greater percentage would lead to resistance in the borers.

The US Environmental Protection Agency has recently approved a "refuge in the bag" approach, in which a mix of 90% GM corn and 10% non-GM corn is sold. Previously farmers had to plant at least 20% non-GM corn. "As we transition to this, I do have concerns about long-term resistance management and sustainability of the technology," Hutchison said. [The Guardian]

80beats: GM Corn Leads to Organ Failure!? Not So Fast

tells how a corn not intended for humans got into the food supply Image: Hutchison et. al